An Appeal to the HNN Community: Help Longtime Supporter and Contributor Ron Steinman

To the HNN Community:

Many of you have read essays by Ron Steinman on our site over the years. Ron brings a unique perspective from his years as the bureau chief for NBC News in Saigon during the U.S. war in Vietnam, among many other national and international journalistic postings, and it's been a privilege in my short time as editor to share that perspective with our readers.

What you may or may not know is that Ron is experiencing serious kidney disease. He is working with Renewal, a non-profit group, to try to locate a live kidney donor.

Ron of course recognizes the gravity of the request and the generosity of those who make the choice to donate a kidney.

Thank you for your consideration. Let's try to take care of each other in these coming months, in whatever ways we can. 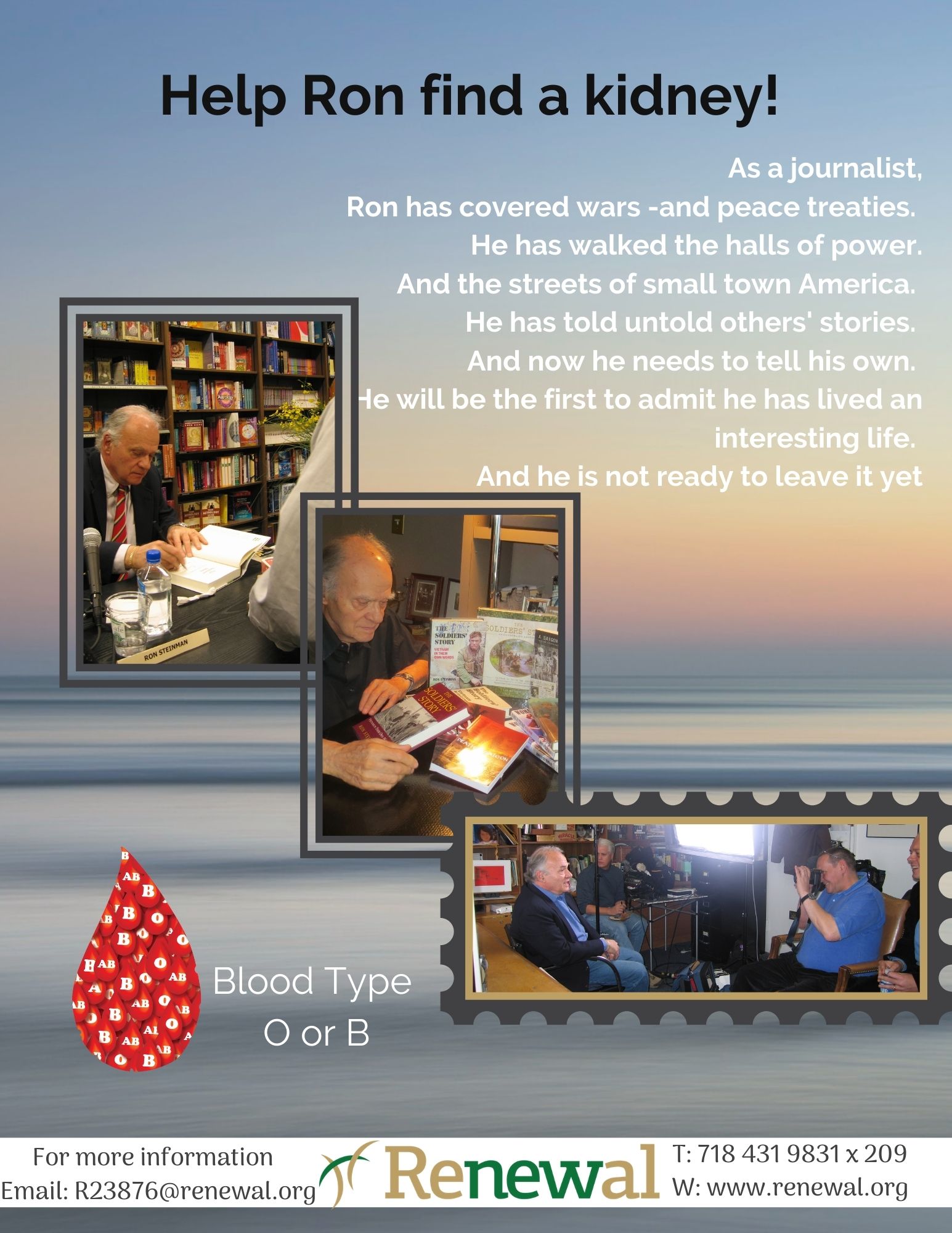 RON STEINMAN began his career at age 23 at NBC News and spent 35 years at the network. He moved from copyboy to producing segments and writing for the Huntley Brinkley Report, first in Washington and then in New York. And then on to news editor/field producer for the newsmagazine show Chet Huntley Reports. For 3 years he produced documentaries and worked on specials, including space coverage, before being named NBC’s Bureau Chief in Saigon during the Vietnam War. He also served as Bureau Chief in Hong Kong and London before returning to New York headquarters to oversee the network’s live news specials.

In 1975 he joined the Today Show, spending 11 years in a number of senior producing positions in Washington and New York, including overseeing production of all the Today Show’s live special weeklong broadcasts from such places as China, Moscow, Seoul and overseas presidential trips. Before leaving NBC in 1992, he spent three years at “Sunday Today” producing 70 segment reports. During 7 years as a freelance producer for ABC News Productions, among other things, he wrote and produced a series ofA&E Biography one-hour documentaries on O.J. Simpson, Malcolm X, Colin Powell, Timothy McVeigh, LBJ, Frank Sinatra, Nelson Rockefeller, Armand Hammer, James Earl Ray, Jim Jones, and the Lifetime Television Intimate Portraits on Gloria Vanderbilt and Doris Duke. At ABC, he also produced “Sole Survivor” for the Discovery Channel, and the “Berlin Wall” for the History Channel. Ron produced 3 of the highly rated 6-part series for The Learning Channel on the Vietnam War called The Soldiers’ Story, and the follow up “Missing in Action”, which won a National Headliner Award and an International Documentary Festival Award. At ABC, he also produced a two part series for TLC on the Persian Gulf War.

At Douglas/Steinman Productions he directed and co-produced the films “My Grandather’s House”, “Luboml: My Heart Remembers” and “The Dance Goodbye.”

Steinman has won a Peabody Award, a National Press Club award, an award from the International Documentary Association, two American Women in Radio & Television Awards, and been nominated for five Emmys.

He has also been executive editor and columnist for the online magazines the Digital Journalist and the Digital Filmmaker. And he continues for The History News Network and on his blogs.