The Case for a National Liberation Day Holiday on December 6

Robert Hardaway is Professor of Law at the University of Denver Sturm College of Law and the author of 26 books on American law and history. 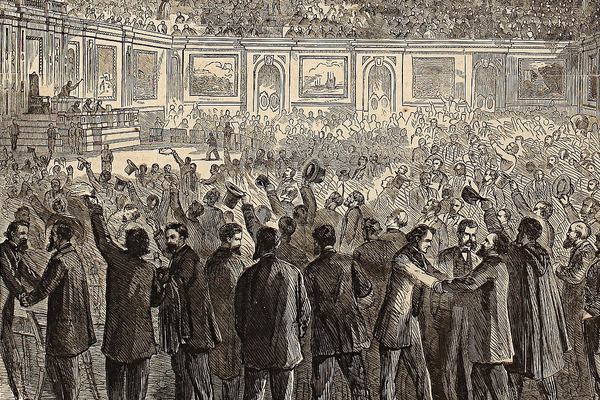 The House of Representatives Passes the 13th Amendment, January 31, 1865

On December 6, 1865, the Thirteenth Amendment of the U.S. Constitution was ratified and became the law of the land. That amendment enshrined into law that “slavery…shall (not) exist within the States…”

Prior to that seminal date in American history, slavery continued to exist in parts of the United States even after the end of the Civil War, including in states which had never joined the Confederacy.  President Lincoln’s Emancipation Proclamation had been a temporary executive order which Lincoln legally justified only as a ‘fit and necessary war measure’ within his powers of Commander-in-Chief in order to cripple the Confederacy’s rebellion, and purported only to free slaves in the Confederacy.  Issued on September 22, 1862, the proclamation provided that it would only take effect in those states currently in rebellion which did not re-enter the union prior to January 1, 1863. In those states which did decide to re-enter prior to January 1, 1863, the Proclamation was clear that its order of emancipation would have no effect and slavery could continue.

After the surrender of Robert E. Lee at Appomattox on April 9, 1865, slavery was still fully legal and practiced in parts of the United States.

On June 19, 1865, a full two months after Lee’s surrender, a little known Union General ventured into Texas, the most remote of the Confederate states, and let it be known that as Texas was one of the states which failed to re-enter the union prior to January 1, 1863, Lincoln’s Emancipation Proclamation would be enforced, at least until further notice and all hostilities ceased. Many of those in bondage had never even heard of the Emancipation Proclamation prior to that time.  It therefore remains a significant date in Texas history, despite the fact that on that date slavery continued to legally exist in other states.

As late as December 5th, 1865, long after Lee’s surrender at Appomattox, and long after June 19, 1865, slavery was still legal and practiced in some of the states which had not engaged in rebellion, including Kentucky and Delaware. Only a Constitutional Amendment could end slavery in those states. Although Congress passed the 13th Amendment on January 31, 1865 over the vociferous objections of Democrats in Congress, it was not until December 6, 1865 that the amendment was ratified and became the law of the land. This was the date on which slavery was finally abolished by national law, and Kentucky and Delaware were legally required to free the slaves within their states.

Today the question becomes which of these dates is the most significant and most worthy of celebration as a national holiday. Freedom was not enshrined across the land on September 22nd, January 1st, April 9th, or even January 31st. It was enshrined only when the Democrats in Congress were defeated and the 13th Amendment was ratified on December 6, 1865. Lincoln’s Emancipation Proclamation, based purely on military powers, is certainly significant in that it laid the groundwork for future legal emancipation. June 19th is also a significant date in Texas history, as it was a day that slaves in Texas were finally told of Lincoln’s military order of emancipation which emancipated some slaves in some states. But surely the most significant day is December 6, 1865, the day that slavery was legally abolished across the entire country, and not just in parts of the country. It is the date that should hereafter be celebrated as a national holiday and known as “Liberation Day”.

Lest the movement for such a national holiday on December 6th be resisted on grounds that federal employees already have too many holidays, a modest suggestion is here proposed—namely that Columbus Day might oblige to make way for a more significant day of celebration. Columbus, though a venturesome explorer, was perhaps the luckiest, finding the American continent by accident based on a faulty calculation of the circumference of the world, and once who once finding it proceeded to enslave those he found there. There are reasons was America got its name not from Columbus but from a later explorer, Amerigo Vespucci. While some might regard Columbus Day as a day of celebration of Italian Heritage, even that heritage is called into question by modern historians today who believe it more likely that he may have been a Portuguese nobleman who adopted his name when he moved to Spain. In any case, the significance of Columbus Day may best be reflected today when mystified customers stand in long lines at the post office, only to discover when the doors are supposed to open, that it is closed because of a federal holiday they had forgotten about. Surely December 6, once made a national holiday would not be so forgotten and would be the cause of national celebrations on “Liberation Day.”