Robert J. Young is Professor Emeritus of History at the University of Winnipeg.

part one of this article is here. 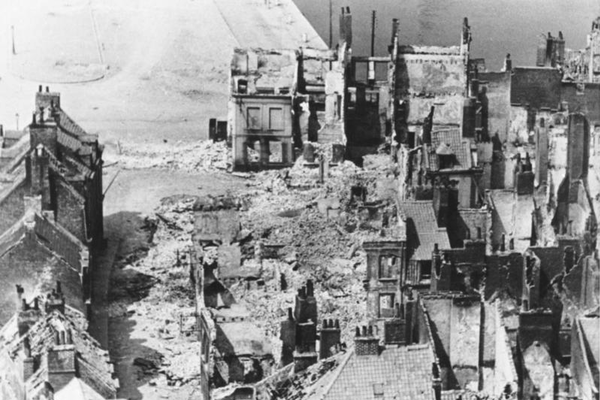 Any review of the military events of 1940 inevitably leads to some appraisal of the pre‑war condition. If resistance were actually intense, in will and in weapon, what might this suggest about a people said to have been so gutted by the experience of the First World War that all they wanted to do was enrich and amuse themselves? How does it square with contemporary reports that, contrary to the musing of latter‑day prophets, they went to war in September 1939 with confidence and determination? The American ambassador reckoned the nation's "self control and quiet courage" to be "far beyond the usual standard of the human race." Foreign journalists were struck by the fact that there were almost no incidents of reservists failing to report for duty. Janet Flanner judged the nation's morale "excellent" for being "intelligent, not emotional." If there was no enthusiasm for war, neither was there panic, nor presentiment of disaster ‑ which is why, when it came, one instant autopsy followed another in desperate bids to discover, after the fact, what had been missed before.

Had French intelligence overlooked the build-up of German arms under Hitler, or misunderstood how they would be used? No, it had monitored German rearmament since the 1920s, and was clear on the principles of what came to be called blitzkrieg. Had it misunderstood Hitler's intentions, or allowed successive French administrations to become complacent about the nation's security? No again. The warnings were legion and accelerating since 1936.

Had those administrations failed in their post‑Depression responsibilities by refusing to invest in the most modern instruments of war or in the industrial infrastructure needed to produce them? Again, the answer is no. Between January 1937 and September 1939, the French tank force had leaped from 162 machines to more than 2,200. The numbers of 25‑mm anti‑tank guns had risen from 1,800 to more than 2,600, while the arsenal of 75‑mm anti‑aircraft guns had tripled to nearly 400. In September 1938 with a monthly production of only 39 modern planes, the air command said war would mean its annihilation within a fortnight. By September 1939 monthly production was 285. By May 1940, French production of modern combat aircraft had surpassed 600, only a whisker away from German production; and it is in those production figures that one finds an explanation for why the French air force actually doubled in size between the onset of war and the armistice ‑ this despite the loss of 2,000 planes during the six‑week campaign.

Was there then something inherently flawed in the character of the country's leaders, or something missing in their inner constitutions that made them ill‑suited for war‑time leadership? Not unless being decorated war veterans from 1914‑18 ‑ as more than two‑thirds of the French cabinet were ‑ somehow disqualified them for war‑time office. Edouard Daladier, Prime Minister between April 1938 and March 1940, was one such. As an article in the Free Press of 2 September 1939 reported, Daladier had already seen "about as much front‑line fighting... as any man could." His commander‑in‑chief, General Maurice Gamelin, also received high marks from the same paper. Correspondent Harold Moore told the paper's readers that Gamelin, another veteran of the First World War, had assembled what was reputed to be "the finest army in Europe."

How then to reconcile all that made France's defeat unlikely and unpredicted, with her undeniable collapse? At the outset it might be worth remarking that this defeat was not singular, as the Poles, the Danes, the Norwegians, the Dutch, the Belgians, even the English survivors from Dunkirk, would attest. As for the French themselves, the military and civilian leadership, there were certainly errors of judgment.

Some of them were long‑term and abiding. They underestimated the speed with which armored vehicles could negotiate the hilly, forested terrain of the Ardennes, an underestimation that left them content to install only light fortifications across that sector, and to deploy behind those defences only reserve infantry divisions of mainly middle‑aged troops. Those miscalculations, in turn, were magnified by the related strategy of rapidly advancing the mobile left flank into Belgium at the first sign of a German assault, a plan which ensured that some of their best forces ‑ including one of their three light mechanized divisions ‑ were moving away from France in one direction just before seven panzer divisions started moving toward France in the opposite direction.

Significant, too, was the fact that their rearmament program was slower than what the future proved was necessary, partly because the country had emerged later from the world economic Depression than most great powers, and partly because that bitter experience had inspired a commandment for fiscal prudence. Moreover, and contrary to the notion that the French were technologically backward, their acute appreciation of the speed of technological change actually encouraged delaying mass production of the most modern weapons ‑ tanks and fighter planes especially ‑ until a crisis seemed imminent and their deployment more likely to determine the war's outcome.

Related in various ways to all of the foregoing was the signal failure in May 1940 to comprehend quickly enough the lightning pace of the early campaign. Having for too long concentrated on maximizing the armor and armaments on their own tanks ‑ at the expense of speed and fuel range ‑ the French high command could not adjust in a matter of weeks to the distances that enemy armour could traverse, its course paved in advance by the destructive intrusions of the German assault bombers. Calculations of the enemy's capacity for reaching its targets with adequate fuel and infantry support were consistently out by hours, a half‑day, even a day. And related to this, in turn, was the interwar air command's too‑prolonged fascination with strategic bombers, and the attendant playing down of fighter aircraft and of the on‑field impact of dive bombers. They were not ignorant of any of these instruments of modern warfare. They knew, but blinded by the certainty that they were right, they had not understood.

The German victory remains a victory, and the French loss, a loss. But what has happened over the past 80 years, particularly over the past 30, has amounted to a slow and meticulous reappraisal of what actually happened in May‑June 1940. Gone are the days of titles such as The Unfought Battle (1968). Today, current scholarship is in the process of dismantling the allegations that have so long supplied the comic with his bag of satirical jibes at France and the French. Slowly, the image of 100,000 Frenchmen with hands in the air is being replaced by the image of 100,000 hospital beds, and half as many gravestones.

Much has been written on this stunning, and surprising, defeat, some of it resolutely focused on the ground and air operations, some of it using those operations only as prelude to much deeper explorations of why the Third Republic collapsed practically overnight. In the ten year interim between 70th and 80th anniversary of the Fall, a significant number of works have appeared, many of which are interpretively consistent with what I have argued. All acknowledge the French fought valiantly in 1940. All acknowledge the staying power of the “Surrender Monkeys,” the enduring myths of gutless France, the temptation to avert eyes from the national humiliation. But all acknowledge the six week bloodbath, the casualties inflicted, as well as the casualties sustained. On both sides.