Robert J. Young is Professor Emeritus of History at the University of Winnipeg. 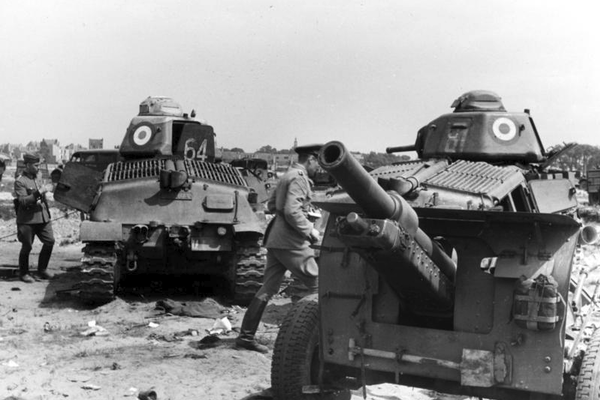 Eighty years ago this May and June, northern France was overrun by a combined air and land assault the Germans called blitzkrieg. Two things are known with certainty by those who can remember, and those who have learned – even if imperfectly. As one earnest undergraduate put it: ‘The Germans took the bypass around France’s Marginal Line’ as part of their strategy of ‘Blintz Krieg.’ Well, the idea is there.

The first certainty is that the armed forces of the Third French Republic were defeated in six weeks. The second is that the defeat led to the immediate collapse of the Republic and the advent of Marshal Philippe Pétain’s Vichy government, a short lived (1940-44) but murderous regime that collaborated with the Nazis and deported thousands of Jews for slaughter. Neither the suddenness of defeat nor its consequences are in doubt.

But because the collapse was so sudden and unexpected, and the consequences so vile, a body of dubious ‘knowledge’ has arisen and endured. It is that which has so colored popular impressions of pre-war, wartime, even contemporary France. Simply recall the famous and worn jests: "How many Frenchmen does it take to guard Paris? Nobody knows, it’s never been tried." Or "Raise your right hand if you like the French. Raise both hands if you are French."  Or "What do you call 100,000 Frenchmen with their hands up? The Army."

Many readers will be familiar with the post-1940 exploits of courageous partisan units defying the German Occupation and operating under the generic expression "French Resistance." But most will not recall reports such as those in Winnipeg Free Press articles of 10 May and 15 June 1940, articles which attributed to the fighting "a ferocity which defies imagination," and which described allied resistance as worthy of "inexpressible admiration." Few now know that there were some 100,000 French soldiers who did not surrender. Somewhere between 55,000 and 85,000 actually died in that six-week campaign, with another 120,000 wounded. Fewer still will know that anywhere between 27,000 and 45,000 German soldiers died during those six weeks, and that over 100,000 of them were wounded. To which one might wish to add their 6,600 dead airmen. Even minimally, therefore, over 300,000 French and German combatants were killed or wounded in May-June 1940. So much for the popular notion that the French army folded like a warm croissant.

Why, then, has ignorance bred faith? Partly because neither of the post‑1945 Republics, the Fourth and Fifth, could see any advantage in rehabilitating a predecessor linked directly to military defeat and indirectly to collaboration with the Nazis. Best leave their predecessor in ignominy. Partly because in their scramble to blame someone else for the disaster, former decision‑makers of the Third, both civilian and military, ensured that the stain would be widespread. Partly because it seemed obvious that a great defeat had to have great causes, ones that surpassed the battlefield and implicated the entire nation. It is this third that explains why so many observers were quick, if only after the fact, to pick up the scent of moral rot: a society which, allegedly since the 1920s, had surrendered to the pursuit of pleasure and self‑indulgence long before it would surrender to the Germans.

This, to be sure, is caricature, its sharp profile in need of sanding down with fact. That student was right to say the heavy fortifications of the Maginot Line were outflanked, not broken, despite the best efforts of Luftwaffe bombers whose post‑victory crews were mortified to see the ineffectiveness of their ordinance. Those crews had sustained heavy casualties at the hands of allied ‑ principally French ‑ fighter planes and anti‑aircraft artillery: more than 500 German bombers destroyed by 25 June, or 30 per cent of the machines operational on 10 May when the offensive in the west began. Their comrades on the ground were equally tested, particularly between late May and the armistice of 24 June when French resistance on the Somme, Aisne, Moselle, Seine and Loire intensified. To be sure, the killing was not equal; the French, again by low estimates, lost approximately 60,000 dead, the Germans over 30,000 ‑ including among the latter those who died under the 450 allied bombing sorties launched in that single week between 28 May and 4 June. The wounding, by contrast, was roughly equal, the French with 120,000, the Germans with about 111,000. Shouldn't knowledge of a combined casualty rate of over 300,000 men in six weeks, over 6000 per day, finally lift the fog that still lingers over the French surrender?

But if the resistance was more intense than is often supposed, with what did they fight? The Maginot Line, it is commonly believed, was a white elephant, tribute to a static notion of warfare that was demolished by a war of movement. The French, many still believe, had no tanks, no aircraft, and few if any modern weapons. But the Line, built in part to economize on defenders' lives after the terrible bloodbath of the First World War, was designed from the start to serve as a hinge for a mobile plunge further north, across the border and deep into Belgium to confront a German offensive from that direction. Though French planners seriously overrated the natural defensive potential of the Ardennes Forest ‑ where the German breakthrough of 12‑15 May actually occurred ‑ the Line was inspired by the natural desire to avert another war on French soil by employing mobile forces, rather than by rejecting them. Indeed, it was only two days after the motorized infantry and artillery of General Giraud's 7th army had begun its rapid advance north‑eastward into Belgium to confront the offensive prong represented by the 30 divisions of General von Bock's Army Group B, that the 44 divisions of the second German prong under General von Rundstedt ‑ including 7 armored divisions ‑ were unleashed southwesterly through the Ardennes.

Though French planners had once been behind the curve when it came to envisaging light and heavy armored units acting independently of the infantry, they had made extraordinary gains in production and assembly in 1939‑40. They had even achieved a slight numerical superiority over the Germans by the outset of the campaign, and had begun to produce models more heavily armored and armed ‑‑ though slower and harder on fuel ‑‑ than most of the machines in the vaunted Panzer divisions. While the celebrated Panzer III tank was 20 tons by weight, including 30 mm armor and a 37mm cannon, the Somua S35 had 56 mm of protective armor and a 47mm cannon, and the Char B was a 32‑ton leviathan with 60 mm of armor and a 75mm cannon.

Even in the air, the French record was far from abysmal. Against a significantly superior Luftwaffe that outnumbered them two to one, French fighters flew more than 300 sorties a day in the first week of June alone, and inflicted a 30 per cent rate of destruction against the Ju‑87 dive‑bombers and the Messerschmitt fighters. So despite Germany's unequivocal victory, the skies were not empty, casualties on land and in the air were heavy, and almost all of the laying down of arms came after, not before, the armistice.

editor's note: an earlier version of this article misstated the count of casualties in May and June, 1940. The total of 300,000 refers to French and Germans killed or wounded.