Stephen Tomkins is the author of eight books on Christian history, including biographies of William Wilberforce and John Wesley. He is the editor of Reform magazine and was previously deputy editor of Third Way. He has a PhD in church history from the London School of Theology. 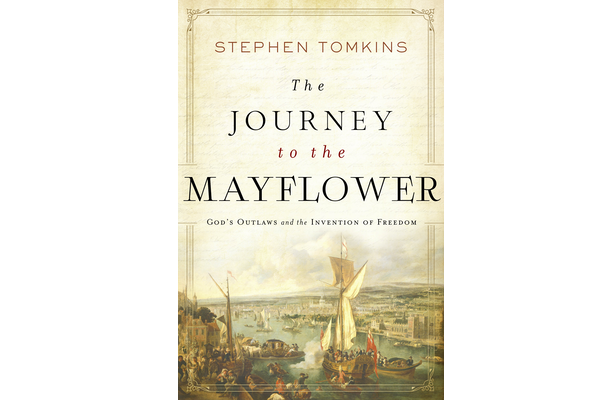 Adapted from The Journey to the Mayflower by Stephen Tomkins, published by Pegasus Books. Reprinted with permission. All other rights reserved.

There were a number of considerations that made the Separatists look to America in 1617, but the most commonly cited motive for the sailing of the Mayflower– to escape persecution and worship freely – was not one of them. Persecution had driven them out of England to the Netherlands, but they had not suffered persecution in the Netherlands and the Leiden church had especially good relations with the Dutch. Persecution prevented them from going home, but not from staying where they were.

The key consideration, according to the Separatists themselves, was that life in Dutch cities seemed just too grim for their church to have any future. They were losing the older generation, Bradford said, who seemed to be dying prematurely after years of unskilled urban labor, or, having used up their savings, returned to England to lodge with family. And they were losing the younger generation, who were fed up with godly poverty and surrounded by worldliness they would never have encountered in an English village. ‘Getting the reins off their necks’, Bradford said, some young people joined the army, some went off to sea and others took ‘worse courses’. Those young people who remained in the faith, he said, joined in their parents’ labors and were incapacitated by them. The leaders feared that within years their church would collapse. America, they imagined, would allow them to create an English village 3,000 miles from the nearest bishop, returning to the agricultural life they yearned for, and escaping the fleshpots of Leiden and Amsterdam.

A sense of failure in their mission added to the Brownists’ discontent, according to Winslow, who lamented ‘how little good we did, or were like to do’. He had hoped that the purity of their church would inspire the Dutch to a new reformation, but they ignored them. The English paid more attention, and many were impressed by the Brownists’ example, but too few were willing to join them in the Netherlands, and fewer stayed. Admittedly, America would offer still fewer opportunities to convert the English, but perhaps, Bradford said, they would be God’s instrument for converting the Americans.

On top of all the difficulties of life in the Netherlands, the English feared that it was about to get worse. The Spanish truce expired in 1621, and it seemed likely that the war would resume. This was a serious consideration, though war with Spain had not stopped the church coming to the Netherlands in the first place.

Another motive Winslow mentioned for going to America was, paradoxically, to stay English. The younger generation had gradually integrated with Dutch society, and it was clear, as Winslow put it, ‘how like we were to lose our language and our name of English’. This undermined their mission to model reform to the English churches. If the Brownists did survive in the Netherlands, becoming just another Dutch denomination would defeat their object in being there.

There is, however, something intriguingly inconsistent and incoherent about the reasons the colonists gave for their decision. Although Bradford’s main explanation was that they were driven to America by the grimness and poverty of life in Leiden, which lay behind all their other problems too, yet he says elsewhere: ‘At length they came to raise a competent and comfortable living’; and though it was not easy at first, he adds,‘(after many difficulties) they continued many years, in a comfortable condition’. He describes their departure from ‘that goodly and pleasant city’. Above all, he says they looked to America as a ‘place of better advantage and less danger’ than Holland, but also says that they were aware of its ‘inconceivable perils’. ‘The miseries of the land ... would be too hard to be borne.’ It would be likely ‘to consume and utterly to ruinate them’. They feared famine and nakedness, ‘sore sicknesses, and grievous diseases’. They had heard terrifying accounts of the indigenous Americans torturing people to death. They were aware of how many settlements had failed and how many lives had been lost. Add to all this the perils of the journey itself, and the frailty of the travelers, and one has to wonder in what sense exactly Bradford was using the phrase ‘less danger’.

When members voiced their serious doubts about the expedition Robinson and Brewster proposed, the reply, as Bradford has it, is fascinating: ‘All great and honorable actions are accompanied with great difficulties; and must be both enterprise, and overcome with answerable courages.’ The reason they needed to leave Leiden, supposedly, was to escape its hardships; and when critics of the plan worried that America would have great hardships, they were told that this great enterprise was worth great hardships. So what was the enterprise, if not to escape hardships?

The colonists seemed to have difficulty articulating exactly what compelled them to leave the Netherlands for America. They had a sense of an important enterprise, which, though they might rationalize it in terms of escaping the difficulties of life in Holland, did not meet that objective terribly well. Their calculation of the risks and imperatives does not add up unless we remember how ingrained it was for the Separatists to see their story in biblical terms, as following biblical patterns. They saw their reflection in countless scriptural parallels, but above all in the exodus – God leading the new children of Israel out of the bloody and antichristian land of their birth, to a place he had prepared for them. From Browne’s first writing, to Helwys’s last, the Separatist equation was repeated (critically in Helwys’s case): ‘England was as Egypt’. They had been delivered and there could be no going back. The Netherlands, however, had not felt at all like the Promised Land, which meant that instead they were in the wilderness, the stretch of wandering and learning that occupied Israel before reaching Canaan. They were God’s ‘little church, fled into the wilderness’, in Ainsworth’s words, or, as Johnson put it, they had followed Moses’ path, rejecting the treasures of Egypt ‘to suffer adversity with the people of God’; they were ‘but strangers and pilgrims’.

The Separatists were prime examples of the fundamentally forward-looking nature of Protestantism – ‘a religion of progress’, as Alec Ryrie puts it, ‘of restless, relentless advance toward holiness, not of stagnation’. Each stream saw itself as the culmination in a century of progress towards truth and obedience, while still challenging its own orthodoxies, their church covenants explicitly committing them to embrace God’s future revelations, to be ready to take the next step. Individual members had once walked miles to acceptable churches, then moved to London maybe, then sailed for Amsterdam, then moved again to Leiden or Emden. If their dreams had failed to come true and no simple way forward presented itself, then their whole religious experience and outlook told them God would reveal a new path ahead. Satan called them back, the Lord called them on. And if the way forward involved a terrifying leap of faith, ‘yet might they have comfort in the same’. Whatever America might entail, it was not retreat; it was not going back to Egypt.