Andrew Fletcher is an intern at the History News Network. 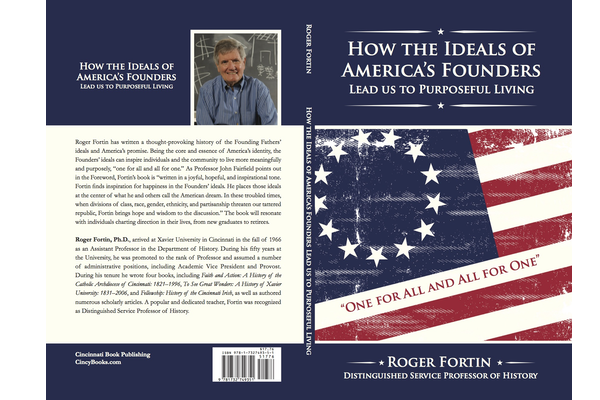 Roger Fortin, Ph.D., arrived at Xavier University in Cincinnati in the fall of 1966 as an Assistant Professor in the Department of History.  During his fifty years at the University, he was promoted to the rank of Professor and assumed a number of administrative positions, including Academic Vice President and Provost.  During his tenure he wrote four books, including Faith and Action: A History of the Catholic Archdiocese of Cincinnati: 1821–1996; To See Great Wonders: A History of Xavier University: 1831–2006; and Fellowship: History of the Cincinnati Irish, as well as numerous scholarly articles.  A popular and dedicated teacher, Fortin has been recognized by Xavier University as Distinguished Service Professor of History.

Andrew Fletcher: We often reference the Founders as the originators of many of the ideals that still guide us today. What Founders’ ideals are at the core of America’s promise?

Roger Fortin: In addition to the "unalienable rights" of life, liberty, and the pursuit of happiness, the founding generation saw civic virtue as necessary to ensure a nation of laws and establish a political system with checks and balances largely designed to prevent the abuse of power. They expressed what they deemed possible and desirable, arguing that individuals should develop themselves as fully as possible.  The Founders also emphasized the importance of honesty. Motivated by a love for the truth, they urged accuracy, clarity, and precision in language.
While the Declaration of Independence symbolized the dignity and worth of every individual, there were glaring paradoxes in society. Blacks, women, and Native Americans were not viewed as equals to white men. Notwithstanding the failings of the Founding Fathers, over time their ideals have proven more energizing than their flaws.

Andrew Fletcher: Why did the Founders promote education as much as they did? What is the value of a liberal education in America?

Roger Fortin: For individualism and social responsibility to coexist, they thought, depended heavily on the quality of education. They hoped to provide a liberal arts education, implanting in the minds of young people the principles of virtue and liberty that would enable them to act as free and independent human beings, making it possible for them to live full and happy lives, as well as helping others.

Andrew Fletcher: What is the essence of the American Dream?

Roger Fortin: To some people the American Dream is success measured by money, power, and fame. To others the term may connote freedom, equality, opportunity, upward mobility, owning a home, among others. The American Dream is about hope, the hope that every individual of whatever status has the chance to be all that he or she can be. That is the essence of the Dream.

Andrew Fletcher: The country is now in a much different place than it was 243 years ago. How has the American Dream changed or stayed consistent, and why?

Roger Fortin: The American Dream is part of America's soul. Like our nation's ideals, the Dream of a better and happier existence for everyone is timeless. As part of America's lifeline, it is indispensable in sustaining our identity and mission and safeguarding and energizing the nation's ethos.

Roger Fortin: The founding generation agreed with John Adams when he wrote that the government that provides "ease, comfort, security, or, in one word, happiness, to the greatest number of persons, and in the greatest degree, is the best." They also generally agreed with Adam Smith, the eighteenth century Scottish economist, philosopher, and father of capitalism, that true happiness lay in "tranquility and enjoyment," which had less to do with an individual's economic status than it did with the moral qualities of men and women.

Andrew Fletcher: America finds itself in an uncertain position and unstable political climate today. What modern challenges do America’s values and character face? In Chapter 5, you assert that the Founders’ ideals help us to lead more fulfilling lives. How do the Founders’ ideals relate to contemporary everyday life for Americans?

Rogert Fortin: While there are things that divide Americans, such as racism, ethnicity, and class, there are many more things that unite us. Our common humanity and fundamental desire to be happy unite us. We're interlocked with other human beings; we're all connected.

We live at a time when we're experiencing a continuing revolution in time and space relationships as well as seeing the digitization, virtualization, and automation or more and more things. The new technologies have thrust a new scale of life upon us. As we assess our nation's ideals and values and reflect upon our sense of direction, we should care about our character. Living life consistent with one's values and convictions is the most noble of human endeavors. As Jefferson put it so well, "in matters of style, swim with the current; in matters of principle stand like a rock."

Throughout the nation's history, Americans latched on to the Founding Generation's ideals, which encourage refinement of those qualities that characterize individuals at their best. As gardens bear the same flowers anew year after year, so in each generation -- especially today -- the ideals must be born anew and revitalized.