Autocrats do not need a majority to destroy democracy. A divided opposition helps them.

Claudia Koonz is the author of The Nazi Conscience and Peabody Family Professor of History Emerita at Duke University. 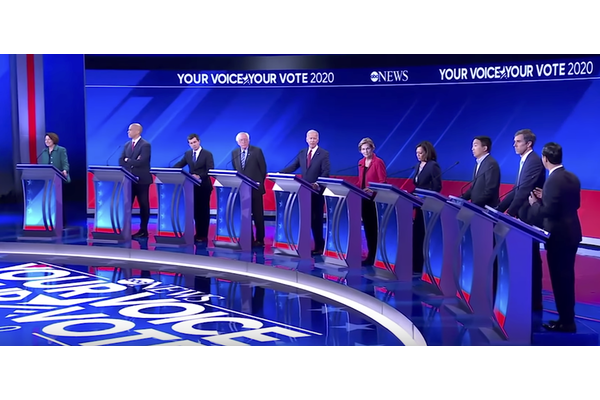 As we witnessed in the third Democratic primary debate last week, Democratic presidential candidates are struggling to distinguish themselves from their party rivals and competing for endorsements. Their horizontal vision in these disagreements diverts their gaze from the peril we face as Donald Trump dismantles the norms that have guided our political life since 1776.

Whatever their differences, Democratic candidates must agree to broad principles related to key issues, for example, immigration, health care, and the growing wealth gap.  A general consensus would leave plenty of room for healthy debates about implementation, but failure to emphasize shared ideals in relationship to two or three major questions will blunt Democrats’ offensive against a candidate whose campaign is based on slander and fear.

Although we Americans like to think our nation is exceptional, the choices made by defenders of democracy in 1922 Italy and 1933 Germany are worth revisiting. The parallels are not perfect.  Our two-party tradition sets us apart from Germany and Italy, each of which had five major parties. But legislative gridlock and voter cynicism today are reminiscent of conditions that marked the last months of democracy in Italy and Germany. The threat to our democracy does not command militias, but hate groups incite violence. Our economy is stable but many Americans feel left behind.  Most worrying, Republicans march in lockstep behind Donald Trump, while Democrats fragment – like opponents of authoritarianism in interwar Europe. Of course, we can’t know whether different strategies in Italy and Germany would have preserved democracy, but since hindsight is 20-20, let’s use it.

In economically devastated post-World War One Italy, labor unions and peasant leagues clashed violently with Mussolini’s Black Shirt militias. Voters in 1921 gave Socialist and Christian Democratic candidates almost half of the vote – compared to seven percent for the Fascist Party. Fearing a revolution from the left, the King used his constitutional power to appoint Mussolini as prime minister in 1922. Mussolini manipulated the election of 1924 to create a Fascist majority. An exposé of Fascist electoral interference by journalist Giacomo Matteotti touched off massive demonstrations. After Fascist thugs murdered Matteotti, 150 deputies protested by walking out of the Chamber of Deputies. After Mussolini expelled them and won the King’s approval, erstwhile critics in the Chamber calculated that opposition to “il Duce” would be futile.  Superficially, the trappings of democracy remained.

Fast forward to the German elections of 1932, when Marxist parties won 38 percent of the vote, compared to the Nazis’ 33 percent. Instead of forming an anti-Nazi phalanx, Communists and Social Democrats fought about tactics and theory. In January 1933, the President appointed Adolf Hitler as chancellor. On February 27, after arsonists set the Reichstag on fire, Hitler called it the beginning of a communist revolution. Despite massive repression of leftist rivals, on March 4, Nazi Party candidates won only 43 percent. Two weeks later, the Catholic Center Party legislators joined conservatives and moderates in granting Hitler four years of dictatorial power.  As in Italy, the handover was technically legal.

Mussolini and Hitler promised to restore national glory and depicted themselves as the last defense against radical socialism. Neither appealed to racism at first. Not even Hitler, who muted his virulent anti-Semitism in public to attract middle-class voters during the late 1920s. New followers told themselves he had mellowed, but his base and his Jewish targets never doubted his true intentions.

President Trump has violated many of the norms and laws on which our democracy depends.  He circumvents Congress by declaring the “crisis” at the border a national emergency. He orders his staff to ignore subpoenas. He uses his presidential status to enhance his family’s wealth.  He demands absolute loyalty from his appointees. He treats truth like a despot and jokes with Vladimir Putin about his “fake news” problem. He boasts about his misogyny and spews racist insults.

Trump is not a despot.  But neither were Mussolini and Hitler early on.  No black or brown shirts march in our streets.  President Trump’s enablers wear white shirts and black robes.  They are unified.  Democrats are not.