by Alon Ben-Meir and Arbana Xharra

Dr. Alon Ben-Meir is a professor of international relations at the Center for Global Affairs at NYU. He teaches courses on international negotiation and Middle Eastern studies.

Arbana Xharra authored a series of investigative reports on religious extremists and Turkey’s Islamic agenda operating in the Balkans. She has won numerous awards for her reporting, and was a 2015 recipient of the International Women of Courage Award from the US State Department. 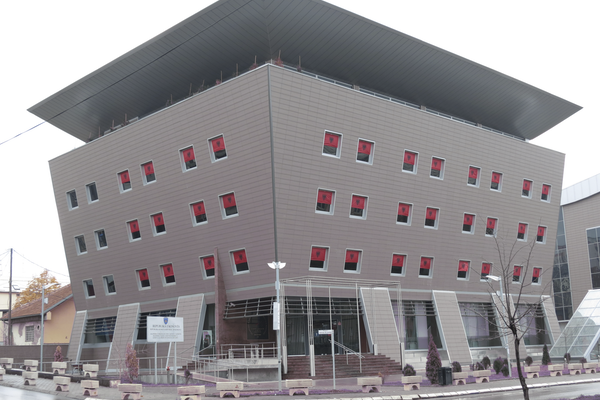 The Academy of Sciences and Arts in Pristina.

On the eve of the twentieth anniversary of the end of Kosovo war, the country is facing a dramatic large-scale brain drain. Every day, young professionals wait in long lines in front of EU embassies to apply for visas to legally leave Kosovo in the search for job opportunities and more promising futures. While it may be argued that massive brain drain is a problem that some European and Western Balkans states are facing, Kosovo’s migration is becoming increasingly acute, especially because of the endemic corruption among the political elite, much of the business sector, and many private and government institutions.

The massive emigration of nearly 100,000 people that occurred in 2013 alone is so alarming demanding that the Kosovo’s government tackle the problem head-on with the support of the US and the EU if Kosovo is to remain a viable country with a secure future.

According to Balkan Insight, a 2016 report from the German Interior Ministry listed Kosovo and Albania as the top countries whose citizens requested asylum in 2015. Kosovars filed 37,095 requests. Only Albanians, with a total of 54,762 requests, filed more.

“Unlike the previous migrations of Albanians from Kosovo over the last 50 years, this new wave is different in that these young people are leaving for good, never to return to the country ruled by the elites who stole their future”, says Ilir Deda, Member of Parliament of the Republic of Kosovo and Vice-President of the Liberal-Democratic centrist party Alternativa. According to him, this trend will continue until Kosovo matures and takes decisive political and practical steps by ending two decades of endemic corruption of its leaders and their parties.

“Kosovo political elites are engaged in unchallenged nepotism, sleaze, misusing of public funds, and impunity that have aroused the feeling of weakness, lack of perspective, and depressed citizenry”, says Lulzim Peci, former Ambassador to Sweden and current Executive Director of the Kosovo Institute for Policy Research and Development.

What is particularly worrisome is that the new emigrants are mostly professionals who lost hope and accuse their deeply corrupt government of showing complete indifference to their needs. They feel trapped, and leaving the country appears to them as being the only viable option.

In Kosovo, where unemployment has reached an alarming 30%, the politicians are the richest class in the country. Many big businesses have greatly expanded thanks to politicians’ support — who received millions in return for “their efforts.” Although the EU has deployed a police and civilian mission in Kosovo (EULEX) to prosecute corruption, it has largely failed. In fact, corruption has only become worse under the mission’s watch.

The current US Ambassador to Kosovo, Philip Kosnett, in the ‘Week Against Corruption’, said that government officials continue to accept bribes, interfere in the justice system, and employ their relatives in public institutions. The EU representative in Kosovo, Nataliya Apostolova, reminded Kosovo’s citizens that corruption is ruining their country’s image.

The US and EU “pressure” to fight corruption and deal with the country’s socio-political and economic ailments have largely failed. The US and the EU must now change their approach because their strategic interest aligns with the Balkans’ and Kosovo’s strong desire to integrate with the EU and NATO.

It is common knowledge in Pristina that the US has directly interfered in Kosovo’s domestic affairs with little or no opposition, because the US is seen as a reliable friend. In 2011, Kosovo’s parliament elected first female president, Atifete Jahjaga, who was proposed by the US. In 2015, under US pressure, the Kosovo Parliament passed a law to create the Kosovo Specialist Chambers and Specialist Prosecutor’s Office, a court based in the Hague that has jurisdiction over Kosovo war crimes. Last December, Kosovo created an Army, defying Serbia and even NATO, but with the full support of the US.

There are many steps the US and EU should take to assist Kosovo in revitalizing its economic sector, encourage social involvement, and push for political reform that would substantially reduce over time the numbers of the young who are leaving the country and precipitating the most disturbing brain drain. They can help Kosovo leave behind the doldrums in which it finds itself, and chart a new path that Kosovo’s government and institutions should fully embrace that would lead the country to a better and promising future.

To send a clear signal to the entrenched corrupt Kosovar officials, US officials should regularly meet with trustworthy politicians and refuse to engage crooked officials in any social settings while preventing high-level businessmen from receiving EU and US visas. This will send an unambiguous message to the public that there is no international support for those self-serving officials who are undermining Kosovo’s future wellbeing.

To nurture an independent juridical system, US and EU should expand training programs for young judges, lawyers and prosecutors and expose them to the ways the US and EU handle prosecution in dealing with corruption, and push for anti-corruption legislation.

In addition, the US and EU should exert all necessary pressure on the government to reform the educational system, including technical training to provide new job opportunities and prepare a new generation to assume leadership positions.

Since Kosovo wants to join the European Union, the EU is in a position to demand that the government begin a systematic process to clean up their acts by fully adhering to the EU’s requirement to qualify for membership and fully comply to the democratic principles, human rights, freedom of the press and untainted judiciary.

Moreover, the US can help Kosovo to develop commercial opportunities by creating a better business climate for foreign investments while encouraging business interaction between western Balkan economies. A healthy economy allows employers to raise salaries – currently the lowest in the region – which can, at least in part, help to stem emigration of youth, especially young couples who can hardly make ends meet.

Of particular importance, the US ought to insist that at least 20 percent of its financial aid to Kosovo is dedicated to participatory sustainable development projects. Communities can choose their own projects where the youth would be directly involved, develop a strong sense of belonging, feel needed, find meaning in their work and develop a vested interest in their projects and thus the motivation to stay.

In the final analysis, however, every single official ought to remember that Kosovo has emerged from the ashes of many thousands of men and boys who were slaughtered by the Serbian military to prevent the rise of an independent and free Kosovo. They have a moral responsibility and a sacred duty to put the country’s national interest above their own and prevent brain drain, as the future of Kosovo rests on the vitality of its youth, in which every single Kosovar has a stake.