Misery and memory in Glendora, Mississippi: How poverty is reshaping the story of Emmett Till’s murder

Dave Tell is a Professor of Communication at the University of Kansas. 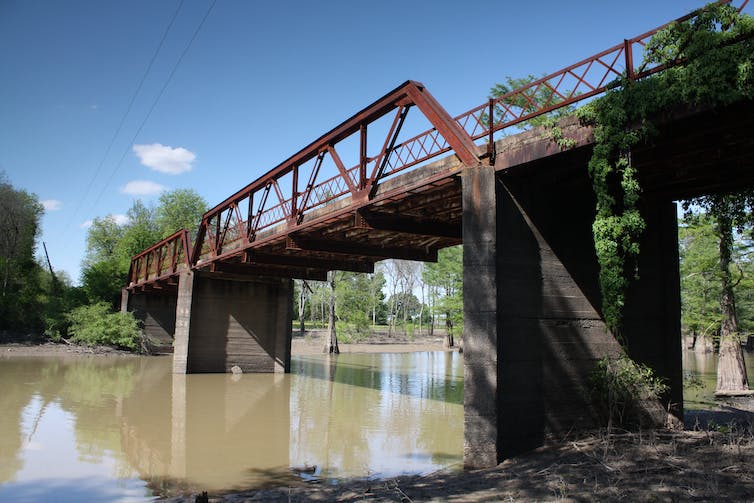 Some say Till’s body was dumped from the Old Black Bayou Bridge in Glendora, Mississippi. Others dispute this detail. cmh2315fl/flickr, CC BY-NC

In August of 1955, Emmett Till was lynched in the Mississippi Delta. The 14-year-old African American reportedly whistled at a white woman, violating the racial norms of the Jim Crow South. For this supposed infraction, he was abducted, tortured, shot and dropped in a river with a cotton gin fan tied to his neck. 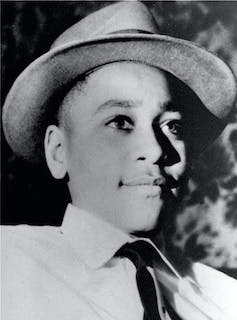 A portrait of Emmett Till, Christmas 1954. AP Photo

Yet for 49 years and 11 months, his murder was all but forgotten in the Delta – the first memorial to Till wasn’t dedicated until July 1, 2005.

Since then, however, the region has witnessed an unprecedented “memory boom.” More than US$4 million has been invested in dozens of roadside markers, a museum, two restored buildings, an interpretive center, a walking park and a community building.

But many details of what happened to Till on that fateful night remain murky, and the abrupt investment in his memory raises a series of questions. Who gets to tell this racially charged story? Who gets to decide what, exactly, happened? And what’s motivating the construction of these memorials?

My just-published book, “Remembering Emmett Till,” addresses these questions head on. It suggests that as Till’s story has been passed down through the generations and taken up by a range of memorials, its plot has been shaped by forces like poverty as much as by fidelity to historical fact.

This is nowhere more conspicuous than in the village of Glendora, a small community 150 miles south of Memphis, in the heart of the Mississippi Delta. Beset by poverty, the village clings desperately to a version of Till’s story that few others seem to believe.

A community mired in poverty

Glendora is saturated with memorials. The tiny town of five streets boasts 18 signs dedicated to the memory of Emmett Till’s 1955 murder. In addition, Glendora is also home to the Emmett Till Historic Intrepid Center, a Till-themed park and the Black Bayou Bridge – a long-decommissioned bridge recently explored in a New York Times article as the site from which Till’s body may have been dropped in the water.

Glendora is also marked by breathtaking poverty. In an application for federal assistance, town officials noted that the Glendora median household income is 70% below the state average, 68% of families live below the poverty line, and just 18% of the adults have earned a high school education. According to numbers published by Glendora Mayor Johnny B. Thomas in 2017, 86% of children in the village live below the poverty line. Partners in Development, a nonprofit committed to helping the poorest of the poor, has chosen to focus on Haiti, Guatemala and Glendora, Mississippi.

The Glendora version of Till’s story is unique on two counts.

First, while virtually every 20th-century history of Till’s murder suggests that the murderers dropped the body in the Tallahatchie River, the commemorative work in Glendora suggests that Till was dropped into a tributary known as the Black Bayou from a bridge on the south side of Glendora. According to this account, the bayou then carried Till’s body for three miles to the Tallahatchie River, where it was recovered.

Second, while no historian has been able to say with certainty where the murderers obtained the fan they used to weigh down Till’s corpse, the Glendora museum claims that the fan was stolen from the Glendora Cotton Gin, presumably by Elmer Kimbell, a gin employee and the next-door neighbor of confessed murderer J. W. Milam. 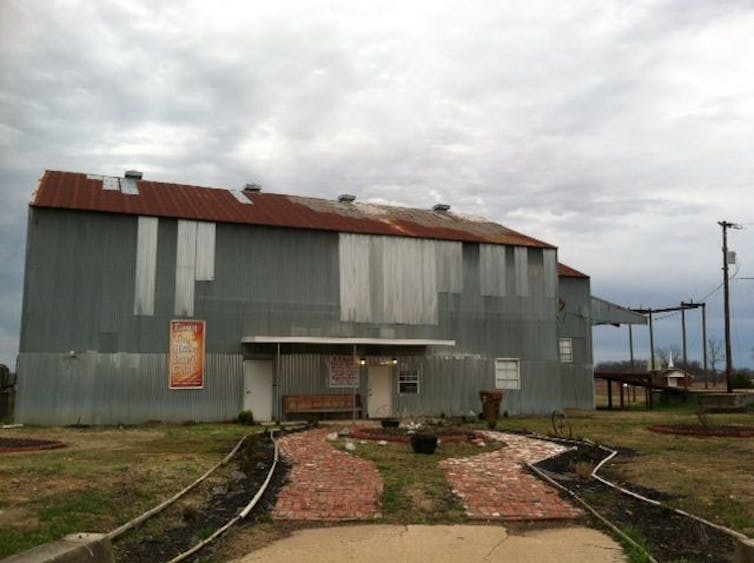 The building that once housed the Glendora Cotton Gin is now the Emmett Till Historic Intrepid Center, the only museum in the world entirely dedicated to Till’s murder. Pinterest

While these variations on the finer points of Till’s story may seem like minutiae, to Glendora residents they are matters so weighty that it sometimes seems as if the very future of the town hinges on where Till’s body was dropped in the water and what fan weighed it down.

In 2010, the Mississippi Development Authority sent a team of economic development experts to Glendora. Their charge was to devise a plan to rescue the town from poverty – a tall order.

The team struggled to find solutions. Aside from the unrealistic suggestion that the town turn the snake-infested land along the bayou into “riverfront property,” the development authority’s only other proposal was that Glendora capitalize on its connection to the Till murder. More commemoration, they said, would bring tourists; tourism would beget economic development.

The viability of this suggestion, of course, turned on a version of Till’s story that maximized the relevance of Glendora. None of this was news to Mayor Thomas. Since at least 2005, he had been promoting a Glendora-centric narrative of the murder in which Till’s body was dropped in the Black Bayou tied with a fan from the local gin.

While plausible, these claims are difficult to prove. One key authority has refuted them: the Mississippi Department of Archives and History.

The state agency has invested more funds into Till’s commemoration than any other organization.

It restored the Tallahatchie County Courthouse, the site of the Till trial, and even invested $200,000 in the controversial restoration of Ben Roy’s Service Station in Money, Mississippi. Although the service station sits just 67 feet south of Bryant’s Grocery and Meat Market, the site of Till’s alleged whistle, it played no role in the Till murder, aside from unverified claims that customers discussed the murder from the porch.

The agency, however, is not convinced that Till’s body was dropped from the Black Bayou Bridge. Nor does the organization believe that the fan was stolen from the local gin. 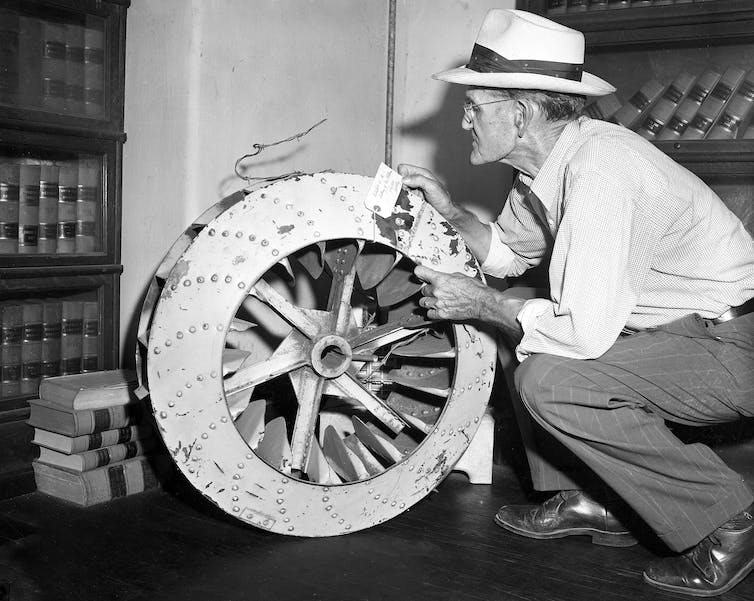 A cotton gin fan is presented as evidence in the trial. Its origins remain a point of contention. AP Photo

In fact, the agency has, in its files, a five-page “Summary of Research” that’s dedicated to the contested veracity of these two claims. The document finds neither claim verifiable and has thus rejected every grant application the town has ever submitted.

Mayor Thomas has one state agency telling him to lean hard into Till’s story and another rejecting his every attempt to do so.

The mayor gets creative

Without the backing of the Mississippi Department of Archives and History, Thomas has nonetheless been able to erect tributes to Till’s legacy.

The work began on Sept. 27, 2005. On that day, the United States Department of Agriculture awarded a Community Connect Broadband Grant to Glendora. Funded at $325,405, the grant was intended to bring broadband connectivity to Glendora.

After obtaining the grant, Thomas used the USDA money to convert the old cotton gin into a community computer lab with internet access. But he also used some of the funds to construct the world’s first Emmett Till museum – the Emmett Till Historic Intrepid Center – which was also located in the gin. Although the USDA approved the expenses, it is unclear whether they knew that their money was being used to build a museum. In the 647 pages of records preserved by the USDA – including the application, labor contracts, invoices and correspondence – Emmett Till isn’t mentioned once.

After the grant ran out, Glendora couldn’t pay the bills and internet service was discontinued. It has not resumed. The museum, on the other hand, is still in operation and visitors do occasionally stop in, though the majority of tourists go to Sumner, a town 12 miles north of Glendora and the site of the trial.

While the museum was initially funded by the USDA, it is maintained on a day-to-day basis by the Glendora Economic and Community Development Corporation, a 501(c)3 founded by Thomas. The town has assigned most, if not all, public business to the nonprofit. Glendora’s development corporation pays city workers, operates 24 Section 8 apartments and operates the Till museum. According to public records, the public housing funnels about $100,000 a year of federal HUD money into the nonprofit. With this money, the nonprofit maintains the apartments, pays city workers and, critically, subsidizes the Till museum.

Yet the questions remain unanswered: Was Emmett Till actually dropped from the Black Bayou Bridge? Was the fan stolen from the local gin? Was Elmer Kimbell involved?

Perhaps. But it is impossible to separate the veracity of these claims from the poverty of the townspeople. Thomas has been able to leverage the town’s poverty to support the museum; the museum, in turn, supports Glendora’s plausible-but-unverifiable theories of Till’s murder. Had Glendora been wealthy, there’d be little incentive to stick so adamantly to this version of the story. The Black Bayou Bridge would be lost to memory and Elmer Kimbell would rarely appear in the stories of Till’s final night.

But Glendora is not wealthy. Instead, sustained by the poverty of the town, stories about Kimbell, the Glendora Cotton Gin and the Black Bayou Bridge continue to circulate – sometimes from the highest echelons of media.