The Spies' Marathon before Patriots Day

William Lambers is an author who partnered with the UN World Food Program and Catholic Relief Services on the book Ending World Hunger. His writings have been published by the NY Times, History News Network, The Hill, Newsweek and many other outlets. 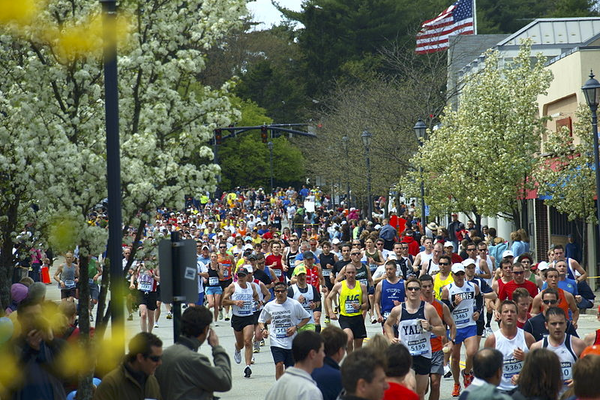 Long before there was the Boston Marathon, a couple of British spies in Massachusetts stumbled into one of their own. Captain John Brown and Ensign Henry De Berniere were sent by British General Thomas Gage on a long journey to survey the countryside outside Boston in February, 1775.

Gage was planning to move troops against the rebellious colonists, but needed intelligence on roads and towns for the dangerous mission. Things were tense between the armed Massachusetts colonists and the occupying British forces in Boston.

Brown and De Berniere disguised themselves to look like the typical Massachusetts resident of the time, brown clothes and reddish handkerchiefs. Their mission was by foot through Eastern Massachusetts. These spies had their own colonial version of the Boston Marathon traveling through Suffolk and Worcester counties. They needed lots of carbohydrates.

So Brown and De Berniere, along with their servant John, stopped to eat at a tavern in Watertown early in their route. They of course wanted to go unnoticed, finish their meal, and rest for the night. But when the restaurant's waitress kept eyeing them "very attentively," this was not a good sign for the spies.

The two men tried to make casual conversation with the waitress, remarking on the fine land of Massachusetts. The waitress replied, "So it is, and we have got brave fellows to defend it, and if you go up any higher you will find it so.”

Uh-oh. That is the word spies never want to say while on duty. Getting recognized a few minutes into your mission is a tough start for an undercover operation.

De Berniere wrote in his account, "This disconcerted us a good deal, and we imagined she knew us..." They conferred with their servant John, who overheard that indeed the waitress had recognized the British officers. Their mission was compromised and they were in danger. They decided not to go back to Boston though because they would look foolish.

The British spies did cancel their plans to stay overnight at the tavern. It was not clear if they left a tip for the waitress.

Brown and De Berniere continued on to a safer inn. They eventually made it all the way to Worcester “very much fatigued” from their journey. But as they continued on their “secret” tour of Massachusetts more people were taking notice of them. They did keep collecting information from all the towns.

On the way back to Boston a classic Nor'easter arrived, bringing snow and rain to their obstacles. De Berniere wrote “it snowed and blew as much as ever I see it in my life.” Welcome to Massachusetts! They walked very fast, fearing pursuit. This was a race for their lives. De Berniere wrote, they were exhausted, "after walking thirty-two miles….through a road that every step we sunk up to the ankles, and it blowing and drifting snow all the way.”

Gage should have given them a medal for their marathon spy mission when they returned to Boston. He received good intelligence from his officers. They showed courage and endurance under tough conditions. In March he even sent the pair on a sequel to gather intelligence on a town called Concord.

We know what happened next. On April 19, 1775, the first shots of the Revolutionary War were fired at Lexington, followed by the fight at Concord Bridge.

We celebrate Patriots’ Day to commemorate the battles of Lexington and Concord. The Boston Marathon is run on that day. Hopefully, not in the snow that Brown and De Berniere endured.

Patriots’ Day can also be a celebration on the peaceful relations between Britain and the U.S. after many years of war. The building of that peace was a marathon in itself spreading over many decades and treaties. That is something we should be proud and hope it stands a symbol of peace for all nations.

If you are running the Marathon, or exercising on your own, you can use the Charity Miles app to raise funds for the World Food Program or Save the Children. This will help bring food and comfort to children who are living in war zones. The Boston Marathon is a great race and can rally support for this and many other social causes.