Fear and Loathing on the Southern Border are Not New

Robert Bartholomew holds a Ph.D. Medical in Sociology from James Cook University in Queensland, Australia. He is a Research Fellow with the Center for Inquiry in Amherst, New York and is the author of fourteen previous books.  Anja Reumschüssel is a freelance science journalist living in Hamburg, Germany. Her articles have appeared in various publications including GEO, National Geographic, and STERN. They are the co-authors of American Intolerance: Our Dark History of Demonizing Immigrants  (Prometheus Books, 2018). 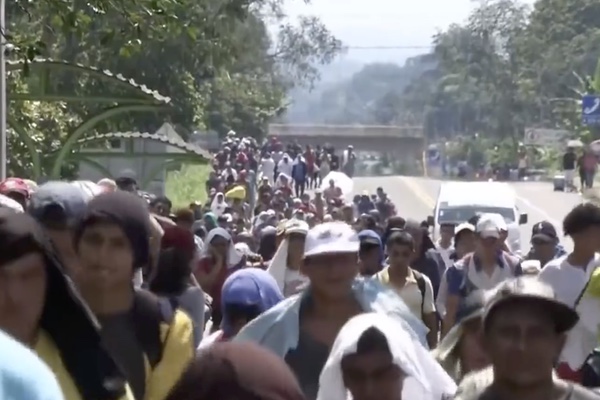 “Terrorists, rapists, drug dealers and gang members at our southern border pose an imminent threat to America’s way of life.” While this could pass as a statement from President Donald Trump on the migrant caravan, it could just as easily have been part of the anti-migrant rhetoric of the 1850s. The fear of sinister foreigners on our southern doorstep has been rife for nearly 200 years. 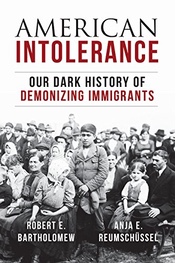 From the time Texas became an independent country in 1836, until its full annexation a decade later, its citizens of Mexican heritage were widely viewed by their Anglo conquerors as a strange mixture of “Negroid,” “Mongoloid” and “American” racial types who were dirty, lazy, untrustworthy, of low intelligence, and prone to thievery and gang activity.  These traits were seen as the predictable outcome of breeding between the African, Spanish and Native American races.  Animosity was once so great that until 1890, a person of Mexican heritage had the same chance of being lynched as an African-American.  Sadly, many of these stereotypes persist today.

In the early 20th century, historian and Klansman Lothrop Stoddard produced a series of popular books that warned of the perils of Latin American race mixing.  Stoddard’s view of the mixed breed Mexican peasant was far from complementary.  In Re-Forging America (1927) he described them as “a poverty-stricken, ignorant, primitive creature, with strong muscles and just enough brains to obey orders and produce profits under competent direction.”  He held similar views of other Central and South Americans.

While the United States promotes itself as a melting pot of ethnic and religious diversity, it has a checkered history when it comes to putting these ideals into practice.  People of Mexican and Central American ancestry are part of a long list of culturally diverse groups and nationalities that have been vilified as leeches on the American welfare system, and a threat to our national security. Immigrants are some of the most vulnerable people on earth and make easy scapegoats for complex problems of the day.  The recent efforts by President Trump to build a wall along our Southwest border, and to forcibly stop the caravan, are the most recent attempts to further underscore our differences, instead of focusing on our common humanity.

In reality, illegal crossings at our southern border are near an all-time low.  Fears of a caravan heading our way are an artificial threat created by conservative pundits and “state-run” Fox News, intended to stoke anxiety and division.  The American habit of demonizing outsiders shows no signs of abating.  Today, immigrants are blamed for taking jobs, eroding values, breeding crime, and bleeding the welfare system dry.  However, the statistics tell a different story.  Most immigrants are law-abiding.  Both legal and undocumented migrants are less likely to commit crimes than native-born citizens – and the gap is not even close.  This pattern has held true for over a century, irrespective of education level or country of origin.

During periods of great fear, there is a tendency to release pent-up tensions by creating scapegoats.  Ironically, the most vulnerable are the easiest targets:  immigrants, asylum-seekers, and minorities. This process of blaming others for society’s problems reduces anxiety and offers a simplistic explanation for complex issues of the day.

This has happened many times throughout our history.  During the nineteenth century, Americans endured the Great Catholic Scare, a fear of Mexicans, imposed a ban on Chinese migrants, and engaged in the systematic persecution of Native Americans.  At the time, “Indians” were not citizens and were considered foreigners in their own land.

A second wave of scares arose during the twentieth century, amidst the fog of war:  the German-American hysteria of World War I, the internment of Japanese-Americans after the bombing of Pearl Harbor, and the Jewish refugee spy panic of the Second World War.  In each instance, people of a certain ethnicity or religious affiliation, were put under suspicion for aiding and abetting the enemy, usually on the flimsiest of evidence, exaggerated statistics, false claims, and little more than rumor and hearsay.

The United States has accepted tens of millions of immigrants during its relatively short existence, but there is a dark legacy that is often overlooked.  At certain times during past foreigner panics, the American dream has been denied to those who were poor, handicapped, deemed physically unattractive or practiced polygamy. At other times, people were rejected solely because they were gay, communist, Native American, Mexican, Chinese, Japanese, German, Jew, catholic or Muslim.  The list is far from exhaustive.

Studying these foreigner panics allows us to appreciate the rich tapestry of human diversity while underscoring the importance of standing up for basic rights when those differences are under threat.  Educating ourselves about the history of these scares is our first line of defense.