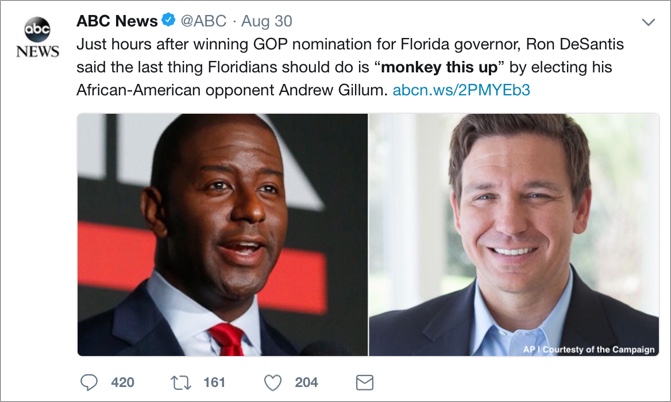 Andrew Gillum’s recent win in the Florida Democratic primary for governor provoked a quick backlash by his Republican opponent Ron DeSantis and President Donald Trump. The morning after the primary results, DeSantis warned Floridians, “the last thing we need to do is to monkey this up by trying to embrace a socialist agenda with huge tax increases and bankrupting the state.” Trump tweeted that Gillum is “a failed Socialist Mayor… who has allowed crime & many other problems to flourish in his city.” The president’s allegation that crime increased in Tallahassee under Gillum's leadership was shown to be false. But Gillum has promised to provide Medicare insurance for all Floridians and an increase in the minimum wage, meanwhile raising taxes on corporations. 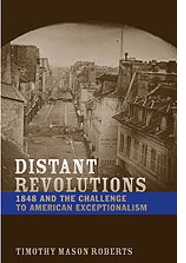 The Republicans’ language, specifically labeling Gilllum a socialist and a mayor who allowed crime to proliferate, coupled with coded language denigrating Gillum’s race, hearkens to an earlier moment in American history, during the era of Reconstruction. It was then that white conservatives first impugned black office holders in the South by drawing attention to their alleged failure to maintain law and order and dangerous socialist experiments.

Following the Reconstruction Acts of 1867, the South was divided into five military districts. The U.S. Army oversaw political processes to ensure that black men had fair access not only to vote but to run for and hold office under the new Fourteenth and Fifteenth Amendments to the Constitution. Through the early 1870s well over a thousand African Americans held federal or state offices in the former slave states and District of Columbia. Radical Republicans in Congress successfully extended the authority wielded by the military in the Civil War into the postwar era. Constitutions written by Reconstruction governments introduced general property taxes, previously anathema in the South.

Reconstruction faltered, however. President Ulysses Grant used military force to stop political terrorism enacted by the Ku Klux Klan, but his second term was marred by scandal. Workers’ strikes in the North in the 1870s and military occupation of the South triggered suspicions that disaffected or unmotivated African American workers might prove dangerous to the country. Democrats appealed to their voting base by emphasizing white supremacy and lower taxes.

Beyond these domestic obstacles to early national civil rights policy, news of French socialism played a pivotal role. Many Americans had first associated socialism with radical French politics and black equality in 1848. Amid Europe’s various upheavals that revolutionary year, France’s had the greatest impact in the United States. Soon after toppling the July Monarchy, the French Second Republic proclaimed national workshops to guarantee work to Paris’s unemployed masses, and abolished slavery in the French Caribbean colonies. These twin acts alarmed many Americans who cherished minimal government and political compromise, not abrupt state abolition of property.

A generation later, France’s defeat in the Franco-Prussian War in 1871 led to the formation of the Paris Commune. The Commune, a workers’ republic, set government salaries at the level of a skilled worker, took unused private property to house the homeless, and enabled trade unions to establish cooperative workplaces. The Commune ruled only in Paris, and, like its predecessor the Second Republic, lasted only a few months before being removed by military force. But it riveted Americans’ attention, receiving more press attention than any foreign event previously.

As a lens, therefore, with which to view Radical Reconstruction, the Commune precipitated a sort of nineteenth-century red scare in the United States, enabling opponents of new black office-holders in the South to portray them not only as predisposed to crime, but anti-American. One southern political leader, for example, branded black legislators “baboons” and “African communists.” A northern journalist warned that the South was subject to “foreign tyranny.” Another compareda state legislature with prominent black members to “a Commune assembled in Paris.”

The association of black political leadership with socialism appeared not only in popular literature, but was also expressed by the American bench and bar in the first cases to interpret the reach of the Fourteenth Amendment. Concerned about government attacks on property rights in the context of socialist and anarchist demonstrations, occasionally violent, in Europe and the United States, Supreme Court Justice Stephen Field in the 1873 Slaughter-House Cases and other conservative judges invalidated Congress’s national civil rights policy, allowing black citizenship to continue to be defined by state officials. In 1876 David Dudley Field, Stephen’s brother, argued successfully to the Court in U.S. v. Cruikshank against federal civil rights prosecution of a white mob that had killed over a hundred blacks. Field wrote that it was time for “bayonet rule” to end in the South, which had enabled black men to “fatten on the life-blood of [the] state.”

Now we are in a post-, not pre-civil rights era. But our politics, as they were during the last years of Reconstruction, are dominated by controversies over foreigners and racial leveling. Gillum stands to become Florida’s first African American governor. If he does so, he will have overcome a history of opposition to black political authority in the South that has equated racial and social equality with foreign revolution, violence, and excessive government power.