How the U.S. Holocaust Museum's New Calendar Distorts the Holocaust

Dr. Rafael Medoff is founding director of The David S. Wyman Institute for Holocaust Studies, and the author of "The Jews Should Keep Quiet: President Franklin D. Roosevelt, Rabbi Stephen S. Wise, and the Holocaust," forthcoming from The Jewish Publication Society in 2019. 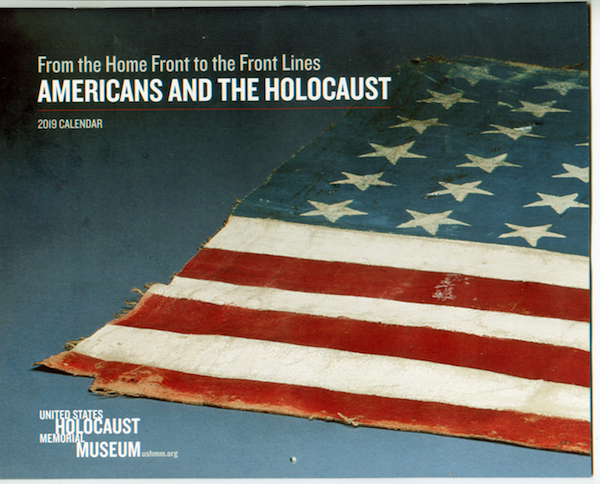 It whitewashes FDR's response to the Holocaust.

The United States Holocaust Memorial Museum has just published a 2019 calendar that focuses on the museum’s new exhibit about Americans’ responses to the Holocaust. Remarkably, two-thirds of the calendar has nothing do with Americans’ responses to the Holocaust. This stark discrepancy is a small but striking illustration of a disturbing bias that has crept into some of the museum’s work in recent years.

Several of the months in the calendar are illustrated by photographs of the possessions of European Jews who immigrated to America during the Nazi years: a little girl’s dress; a teenager’s chess set; a teddy bear in which a family hid its jewelry.

Poignant images, to be sure, but they reveal very little about America’s response to the Holocaust. In a sense, they are even misleading, since their captions fail to explain that these immigrants were the lucky few who managed to get through the harsh immigration system that the Roosevelt administration utilized to keep out most refugees.

By showcasing the exceptions and not mentioning the rule, the text leaves the erroneous impression that these refugee immigrants were not necessarily exceptions at all. The reader has no way of knowing that nearly 200,000 quota places from Germany and Axis-occupied countries sat unused during the Roosevelt years, or that the U.S. quota for immigrants from Germany was filled in only one of those twelve years (and in most of them, it was less than one-quarter filled). 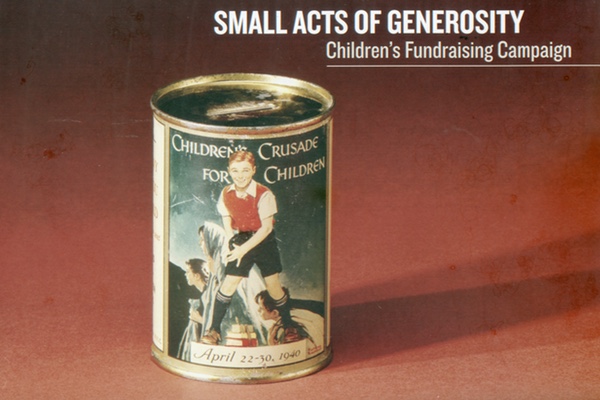 Image used in the calendar.

Obviously, the limited space on a calendar does not leave room for a full discussion of FDR’s immigration policy. But if you’re going to broach the topic—by presenting heart-rending images of the possessions of child immigrants—don’t you owe it to readers to provide at least one sentence explaining the context?

Same problem with the photograph of a typewriter from the 1930s, which adorns the month of March, under the headline “Small Town Triumph.” The caption tells of a Connecticut pastor’s sermon in 1937 that helped block the establishment of a local training camp by the pro-Nazi German-American Bund. Rev. M. Edgar Lindsay deserves credit for speaking out  against the Bund, but opposing fascists in in Southbury, CT hardly qualifies as a response to the persecution of Jews in Europe, which is what the calendar supposedly is about.

Moreover, this is another instance of the calendar misleading readers by highlighting the exception rather than the rule, and not acknowledging the broader context. Most U.S. Christian clergy in the 1930s and 1940s—Protestant and Catholic alike—showed little interest in the fate of Jews under Hitler. But you wouldn’t know that from the U.S. Holocaust Museum’s calendar.

Several months in the calendar are illustrated by mementos of American servicemen from World War Two, such as the diary of a Jewish prisoner of war, the prayer shawl of a Jewish army chaplain, and items connected to GIs who were involved in liberating the camps. Again, poignant images, and they certainly would be suitable for an exhibit focusing on the postwar period. But they hardly square with head curator Daniel Green’s description of the “Americans and the Holocaust” exhibit: “We frame this exhibition with two questions: what did Americans know [and] what more could have been done?”

While the 2019 calendar purports to illustrate “American responses to the Holocaust,” it says surprisingly little about the man most responsible for determining America’s response, President Franklin D. Roosevelt. He is mentioned just once, in the August section, alongside an English-Spanish poster urging all Americans to “fight for victory.”

The caption quotes President Roosevelt declaring: “We are all in [this war]. Every single man, woman and child is a partner in the most tremendous undertaking of our American history.” Stirring words, but what do they have to do with Americans’ responses to the Holocaust?

The May section of the Holocaust Museum’s calendar is headlined “Small Acts of Generosity.” It shows a can used to collect pennies for the “Children’s Crusade for Children,” which, according to the caption, raised funds that “benefited the United Jewish Appeal and other organizations.”

Slippery wording once again makes for sloppy history. The organizers of the “Children’s Crusade” were not responding to the Nazi persecution of Jews. The ‘crusade’ was undertaken in early 1940, following harrowing news reports about the exodus of thousands of Finnish children (escaping the Soviet invasion of Finland) and the mass evacuation of children to England’s countryside during the German blitz of London.

Publicity for the ‘crusade’ listed countries in Asia and Europe whose children would be aided by the pennies. The UJA was just one of an array of charitable groups of various denominations that each received a small portion of the money. For the calendar to single out the UJA implies that the campaign was an example of “Americans’ responses to the Holocaust,” which it plainly was not.

This is not the first time that a U.S. Holocaust Museum calendar has taken something which was not a response to the persecution of the Jews and presented it to the public as if it was related to the Jews. Something similar happened in the 2005 calendar.

That year’s edition featured the scholar and diplomat James G. McDonald, which had been recently donated to the Museum. In a New York Times article prior to the release of the calendar, senior Museum historians Richard Breitman and Severin Hochberg drew attention to a May 1, 1933 diary entry in which McDonald wrote that President Roosevelt was concerned about Germany, and they told the Times that “this picture is very different from the claim that [Roosevelt] was indifferent to the fate of the Jews.”

The February section of the 2005 calendar featured that same McDonald statement about FDR. By including that quotation in a calendar which described itself as focusing on McDonald’s prescient warnings “that the danger to Jews very great,” the Museum clearly was suggesting—as Breitman and Hochberg had claimed—that Roosevelt had been speaking about Germany’s Jews.

But the May 1, 1933 diary entry did not even mention the Jews. FDR actually was expressing concern about Germany’s positions on disarmament and the world economic order. In fact, Breitman in effect reversed himself years later, writing in his book FDR and the Jews (p.58) that the entry referred to “international economic negotiations and disarmament efforts.” But how many readers of the calendar would have bothered to look up the text of the diary entry, or noticed the contradiction between Prof. Breitman’s earlier and later statements?

Admittedly, a calendar is not particularly important in the scheme of things, given its limited circulation; of much greater significance is the “Americans and the Holocaust” exhibit itself, which large numbers of visitors to the Museum will view. But the calendar does offer a revealing snapshot of the exhibit’s flaws. Scholars have pointed to the exhibit’s whitewash of Roosevelt’s abandonment of the Jews, its omission of key historical facts and figures (such as the aforementioned James McDonald), and its promotion of the fallacy that there was relatively little the U.S. could have done to save Jews. Those kinds of distortions do not belong in any history museum, much less one funded by American taxpayers.