Philip Nobile is an investigative reporter who has written for several national publications. He lives in Scarsdale, NY. 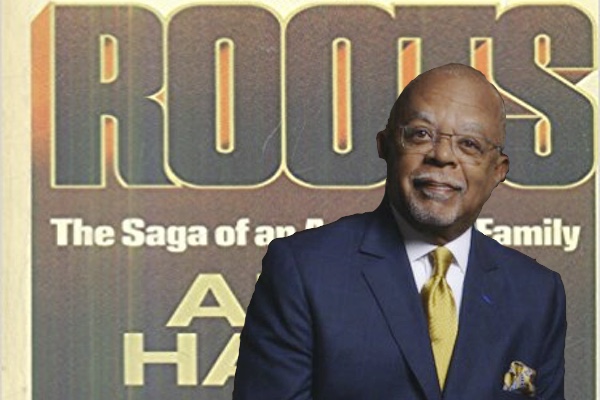 In 1998, Dr. Henry Louis (Skip) Gates, Jr., a University Professor and Director of Harvard's Center for African and African American Research, explained in the Boston Globe why he excluded the Pulitzer Prize Roots from the Norton Anthology of African American Literature, which he edited: “Let's speak candidly. Most of us feel it’s highly unlikely that Alex actually found the village from whence his ancestors sprang. Roots is a work of the imagination rather than strict historical scholarship.”

You may note that Gates censored his Globe quote, redacting his candid takedown of Haley's African fieldwork in his follow-up letter to me (reproduced below). Also, he overstated my position on Roots' 1977 Pulitzer, which was less a "crusade to strip Haley of the recognition" than, as I wrote in my letter, an inquiry as to "why the Pulitzer's ethical standards were different from those of museums that automatically remove forgeries or from universities that routinely revoke tainted doctorates."

In 1999, Gates gave a different reason, though unspecified, for Haley's exclusion to this writer: “We didn't exclude Haley from the canon, he just didn't make the cut. They're a lot of people who were good who just didn't make the cut. It didn't have anything to do with the issues you raise.” Gates was referring to my 1993 article on Roots in the Village Voice that revealed many stupefying deviations from strict historical scholarship according to tapes and documents packed away in Haley's archives at the University of Tennessee (Knoxville).

In 2006, on the eve of the premier of African American Lives, Gates's PBS genealogy series, he deleted his personal doubts about Haley's scholarship, confessed to newfound "Roots envy," and countering critics, cited Haley's undying good faith search for his African clan in the Wall Street Journal: “Since 1977, when I sat riveted every night for a week in front of my TV, I have had ‘Roots’ envy. Even if scholars remain deeply skeptical about his methodology, Alex Haley went to his grave believing that he had found the ethnic group from which his African ancestors originated before surviving the dreaded Middle Passage.”

In 2010, Gates expressed love for Haley, outright endorsed his African findings that he had candidly doubted a dozen years before, and pooh-poohed debunkers in his Richard Gilder lecture at the New York Historical Society:

You could say that after 1977 that like many people in this room I have one serious case of Roots envy. I wanted to know like Alex Haley said that he knew where all the way back on the African side of our family where our family had come from in Africa.

Now I love Alex Haley. I got to know him through Quincy Jones. Quincy scored the music for Roots. But most scholars don't actually believe Alex found that village. When I'm asked and I'm asked all the time by people trying to debunk Alex Haley, I say look--Alex was my friend and he went to his grave believing that he found the village in Gambia--and that's good enough for me.

Later in 2010, stilled wrapped in Roots envy, Gates erased all qualifications and celebrated Haley during a lecture at the University of San Diego:

There was Alex Haley coming out of the blue, could go all the way to Africa. He could go to the ship that brought his African ancestors over and then he went all the way back to Gambia. So I was jealous of Alex Haley. And I had a profound and sincere case of Roots envy. But I figured, well I'll never, only Alex Haley could do that, right.

Well, here's the miracle, one of the many miracles thank God, that happened in my life. I got up in the middle of the night, and to be honest I got up to go the bathroom. And I was standing there in the bathroom minding my own business and I had an idea, and here was the idea: I would take this passion I had from the time I was nine years old in genealogy and I would get eight prominent African Americans and I would trace their family tree back into the abyss of slavery back to the time when their paper trail disappears because inevitably it disappears for all of us, all of our ancestors. There wasn't a paper trail. You can't trace people if there's no printed record. And then when their paper trail disappears, I would do their DNA and tell them where they were from in Africa. I was so excited. I had tears in my eyes. And I couldn't wait until the next day. The next day I called my buddy Quincy Jones. ... I said, "Q, If I could do for you what Alex Haley did, would you be in a PBS series?

In 2017, Gates blessed Haley once again for his sainted and successful search for his African clan on WNYC's Leonard Lopate Show: “You could say I've had one serious case of Roots envy since 1977. Fortunately, I met Alex Haley and you know like everybody else black I wanted to be able to find what ethnic group I was from in African when my ancestor came to United States, where they were enslaved. But you know only Alex Haley could find that, right.”

So what happened to me I got a letter right out of the blue in the year 2000 from a black geneticist at Howard University named Dr. Rick Kittles, a very brilliant man, and he said that he had perfected this technique using DNA, mitochondrial DNA named more specifically ... It's an identical genetic fingerprint that all of us, male and female, inherited from our mothers and she got hers from her mother. So if you think about it you can trace ancestry straight back on the mother's mother's mother's mother's line and everyone knows their common female ancestor out of Africa, mitochondrial Eve. That's how we're all descended from this woman. And that's how Rick Kittles said he could tell us what ethnic group, or you know quote unquote tribe, we were from just like Alex Haley and would I volunteer. ...

I called him on the phone and I said, "Look, you don't know this but I'm a genealogical junkie. If you drop what you're doing, I will pay you to fly up to Cambridge, Massachusetts .... But finally, he extracted the blood and he gave me a DNA report.

Months later I woke up in the middle of the night and I got this idea that – it was a gift from God really  – I stood there in the bathroom with tears running down my face. I could combine this interest that was born on July 3, 1960 at my grandfather's funeral with this new technology of ancestry tracing through DNA and I could basically do Roots in a laboratory, Roots in a test tube. ...

And I remember thinking, oh My God, my whole brand is African and African American studies.

QED: Gates is to Haley what Haley is to the imaginary Kunta Kinte, that is, an unreliable reporter of his peoples' history. This may sound harsh. Gates is the country's foremost scholar of African American studies with a formidable 12,311-word CV posted on his Harvard webpage. Yet it is not the least controversial, in part thanks to Gates's bombshell ghosting of Haley in the Norton Anthology, to regard the co-author of Roots (his Playboy editor Murray Fisher wrote much of the text) as a serial, insatiable, and unrepentant literary thief and scoundrel who perpetrated the greatest crime in 20th century publishing. Let us pray that Gates does not go to his grave believing in Haley's Kunta Kinte moment. 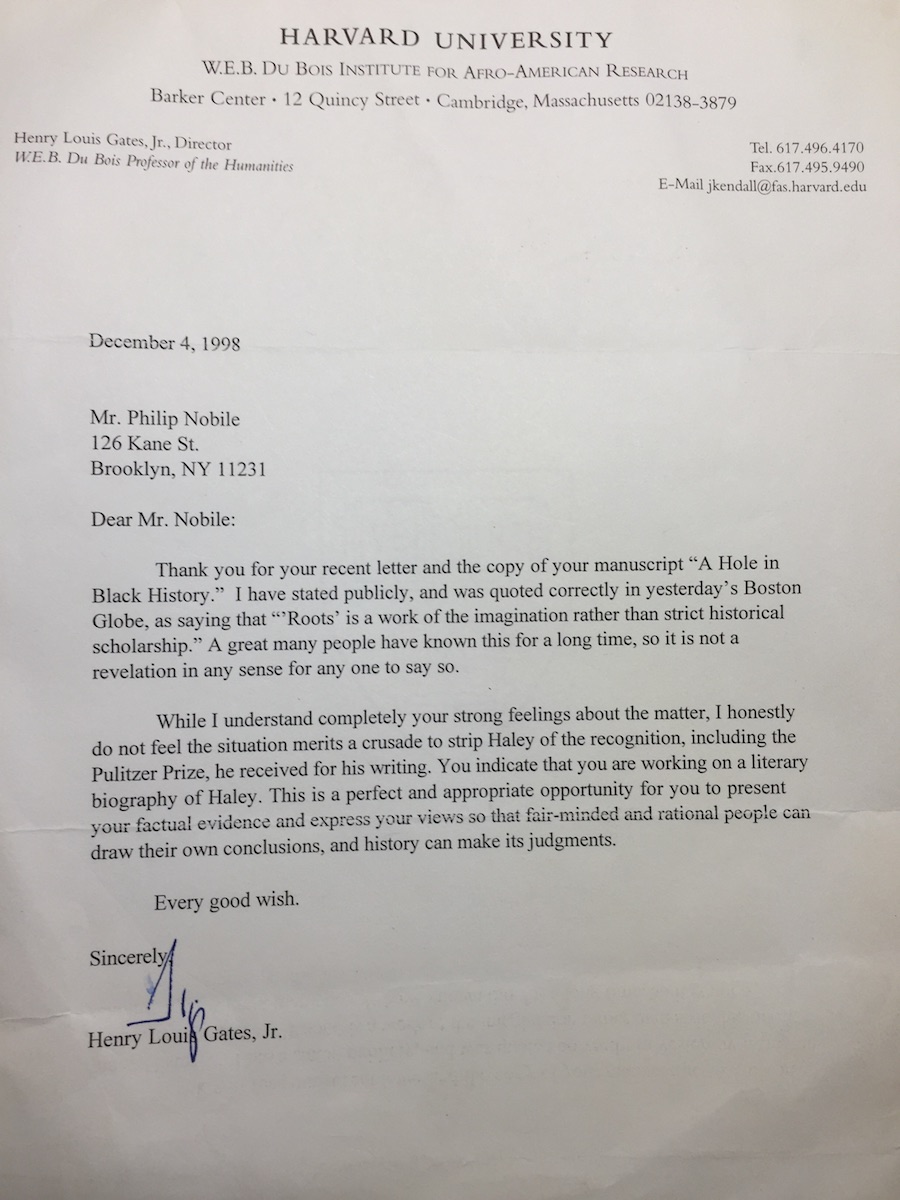