The Year We Celebrated Thanksgiving Two Weeks in a Row

Suzy Evans is a literary agent, attorney, author who holds a Ph.D. in history from UC Berkeley. Her books include Machiavelli for Moms (Simon & Schuster) and Forgotten Crimes: the Holocaust and People with Disabilities. Find Suzy on Twitter @thehistorychef and at suzy@dijsktraagency.com. 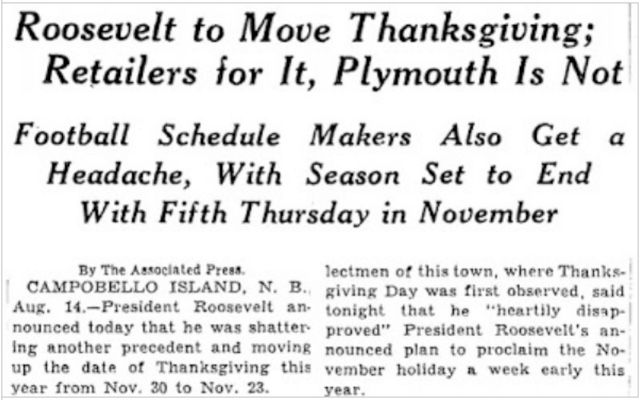 Why did Roosevelt make such a decision in the midst of the Great Depression? The strategy was simple: to extend the holiday shopping season by a week, which, he hoped, would stimulate the economy.

Roosevelt announced his decision at an informal news conference in August, offering “a little tutorial” on the history of the holiday. Thanksgiving is not a federal holiday, he said, and, since it was not set by law, the president could select the date each year. It wasn’t until 1863, when Abraham Lincoln issued a proclamation setting the last Thursday of November "as a day of Thanksgiving and Praise" that that date became accepted, Roosevelt explained. Adding insult to injury, he claimed that there was "nothing sacred about the date.”

Just as he had done with his controversial Court Packing Plan of 1937, Roosevelt had badly misjudged public opinion. Outraged protests began in Plymouth, Massachusetts, ostensibly the site of the “first Thanksgiving” fall celebration harvest in 1621, but quickly spread to other circles.

PRESIDENT SHOCKS FOOTBALL COACHES: Many Games are Upset by Thanksgiving Plan read a headline in the New York Times. And even in the then-staunchly Democratic state of Arkansas, an outraged coach threatened, “We’ll vote the Republican ticket if he interferes with our football!”

Some critics, however, were more diplomatic. In a letter to Roosevelt’s secretary, the Chairman of the University Board of Athletic Control at New York University wrote:

Over a period of years it has been customary for my institution to play its annual football game with Fordham University at the Yankee Stadium here at New York University on Thanksgiving Day... As you probably know, it has become necessary to frame football schedules three to five years in advance, and for both 1939 and 1940 we had arranged to play our annual football game…on Thanksgiving Day, with the belief that such day would fall upon the fourth Thursday in November.

Please understand that all of us interested in the administration of intercollegiate athletics realize that there are considerations and problems before the country for solution which are far more important than the schedule problems of intercollegiate athletics. However, some of us are confronted with the problem of readjusting the date of any football contest affected by the President's proposal.

Outside the collegiate football arena, public opinion ran heavily against Roosevelt's plan, as reflected in a poll that found that 62% of respondents disapproved of the change. And, as opposition grew, some state governors "took matters into their own hands and defied the Presidential Proclamation."

According to the Franklin D. Roosevelt Presidential Library and Museum: “[S]ome governors declared November 30th as Thanksgiving. And so, depending upon where one lived, Thanksgiving was celebrated on the 23rd and the 30th. This was worse than changing the date in the first place because families that lived in states such as New York did not have the same day off as family members in states such as Connecticut! [And so] family and friends were unable to celebrate the holiday together.”

By 1941, most retailers opposed the change, and even the federal government conceded that it hadn't resulted in any significant economic recovery. In response to the controversy, Roosevelt joked, “Two years ago, or three years ago, I discovered I was particularly fond of turkey! So we started two Thanksgivings. I don’t know how many we ought to have next year. I’m open to suggestion.”

Congress, apparently, was not amused and finally resolved the controversy by passing a Joint Resolution that Roosevelt signed on Dec. 26, 1941 returning Thanksgiving to the fourth Thursday in November and establishing the day as a national holiday.