20 Years Ago the British Handed over Hong Kong

Tom Clifford is an Irish journalist. He has written for Japan Times, Irish Independent, the South China Morning Post, Gulf News, the Prague Post and many other publications. 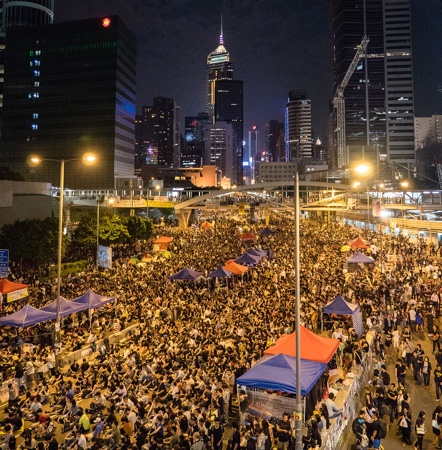 The Umbrella Revolution of 2014 traces its roots to decisions made by the British governor - By Pasu Au Yeung, CC BY-SA 2.0

It was the greatest Chinese takeaway in history but the handover was not meant to happen, ever. The treaty of Nanking in 1842 ceded Hong Kong to the British. Their big ships and military might meant China had little choice at the end of the first opium war. It was given to them in perpetuity.

Food and water, in abundance in Kowloon and New Territories across the harbor, were in short supply on Hong Kong island, the barren rock. It was this, the New Territories, that in 1898 the British pledged to give back in 1997. They didn't think they would ever have to give it back. The 99-year lease was a convenient agreement.

"Why do we have to give it back," former British premier Margaret Thatcher asked in 1984 in post-Falklands triumphalist mode. The impracticality of keeping it with Kowloon in Chinese hands was impressed upon her by civil servants.

Beijing let it be known that they would march the People’s Liberation Army in anyway. China was not Argentina, Deng Xiaoping was not Leopoldo Galtieri. So Thatcher agreed in 1984 to hand it back in 1997.

Every Chinese emperor seeks the "Mandate of Heaven." On that rainy night of June 30, 1997, this mandate was withheld (it rained for two weeks afterwards — a sign the gods were, if not British then, at least, not communist) the 260-island rocky archipelago with the most dramatic skyline in the world saw its policemen change the badges on their caps at midnight (swapping the crown insignia for the orchid) and the Union Jack go down. British Governor Chris Patten boarded the Britannia and the Chinese flag fluttered in the air-conditioned almost completed showpiece seagull-wing exhibition hall, with roof tiles missing due to delays in its construction.

In the run-up to the handover there was a sense not of panic but of unease. Britain was not offering passports. Full stop. No entry. Long before the Polish plumber and Europe Union expansion (yes, a different world) meant that Latvians had right of entry to the United Kingdom, Hong Kong people were asking why could a German (two World Wars and a World Cup football final) live in Britain, but not a Hong Kong man or woman?

This question was asked not because Hong Kong people wanted to swap Mong Kok for Merseyside or Kowloon for Canterbury but if the Chinese decided to crack down (remember Tiananmen), then is it Britain's duty to provide a safety net? The naïveté was almost touching. Hong Kong was the most successful colony in the world, with a popular governor — but still to London, a colony. China was the UK's main focus, Hong Kong was getting in the way of the Chinese market. Former British Prime Minister John Major had been the first western leader to visit post-Tiananmen Beijing. China, to Britain, meant business.

London's last man in helped Britain declare at 1:55 all out. On a night when showers lashed Hong Kong, rain was not going to stop the play on June 30, 1997.

Chris Patten, the 28th and last governor of Hong Kong, was to lead the retreat. Britain was signaling not just its departure from Hong Kong but an effective end to empire, an imperial sunset.

Most politicians build their careers upon successes. Patten was astute enough to turn a humiliating failure into political success. When John Major's Conservatives won the 1992 election, Patten, who had helped organize the party's victory, lost his own seat in Bath, Somerset.

When the news came in, there was cheering and backslapping at the Conservative headquarters. Patten had never been right-wing enough for many Tories who questioned what they viewed as his “soft'' social policies. Thatcher did not like him and let it be known.

Major, though, stood by him and made the former MP Governor until handover night on June 30, 1997. Whitehall wanted a safe pair of hands — no ruffling of the feathers — with the emerging China market. There was no point putting commercial gains at risk. Patten, a failed politician, seemed a safe choice. He was meant to appreciate the perks, build up a nice retirement fund; surely he wouldn't be too worried about Hong Kong. They were spectacularly wrong.

No plumed hat for this governor, no traditional role as imperial bystander above the fray, battle was being joined. Upon his arrival in July 1992, he made the wrong noises — he mentioned rights, liberties and democracy. Beijing, like a former British queen, was not amused. Neither was London but Major resisted pressure to bring him home.

A heart operation in 1993 revealed just how distanced he was from the commercial establishment. News reports that he was undergoing the operation saw the stock market surge. There was a slight sell-off when it was announced that he was on the road to recovery.

Patten was a family man and his wife and three daughters lacked the reserve of previous governors' families and were obviously comfortable with life in Britain's most prosperous colony. They were approachable. His wife's visits to hospitals and charity organizations were relaxed and free of undue protocol.

Newspaper cartoonists even sketched the Pattens' dogs, Whiskey and Soda, depicting them as Norfolk Terriers snapping at the heels of Chinese politicians. Sometimes they were doing more than snapping.

Then horror of horrors, Patten started to go on walks, not to where the elite lived on the Peak but to Hong Kong's more traditional districts. His popularity was obvious. Ordinary people, grandmothers, laborers on building sites would try to shake his hand.

When he visited teahouses and chatted with staff, he got a reception no Chinese politician could ever have dreamt of. Under Britain, Hong Kong was not a democracy. The lack of franchise was something Patten was determined to make right but major commercial interests in the colony as well as Beijing were dead set against his plans. So was the general public, which had little idea of democracy.

While they appreciated a Hong Kong governor standing up to Beijing, people in Hong Kong had long harbored deep grievances about Beijing; many had fled the Chinese mainland after 1949. But only 35 per cent of the eligible electorate voted in Legislative Council elections.

The low turnout took the steam out of Patten's reforms. The council had limited powers and by the time Patten left, Beijing felt confident enough to keep the colony's pro-democracy politicians at arm’s length.

Patten was vilified by Beijing (whore of a thousand years was just one of the more colorful descriptions) in 1997, but in the years since, Hong Kong's tea shops have never had a more popular customer.