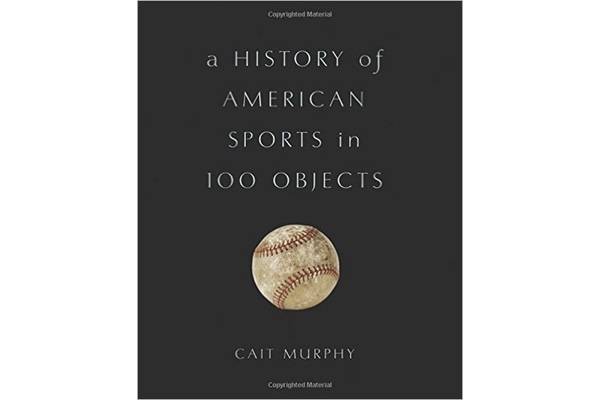 An interview with Cait Murphy, author of A History of American Sports in 100 Objects (Basic Books, October 11, 2016)

Where did the idea for A History of American Sports in 100 Objects come from?

Credit the BBC. A few years ago, it did a brilliant series of radio broadcasts on the theme, A History of the World in 100 Objects. I was so taken with the idea that for Christmas 2014, my siblings and I put together a book for our mother, A History of the Murphy Family in 101 Objects.  So, the concept had been percolating in my mind for a while. Given my interest in sports, putting the two together now seems obvious.

How did you decide which objects to include?

About half the entries were relatively straightforward, and I think anyone would include them.  John L. Sullivan, Babe Ruth, Babe Didrikson, Jesse Owens, Jackie Robinson, Muhammad Ali, the Munich massacre, the Battle of the Sexes, Secretariat, the 1999 Women’s World Cup, Lance Armstrong, the Williams sisters, and Michael Phelps have to be there. In these cases, I would call museums, historical societies, and anyone else I could think of and ask what they had. Mostly, people were cooperative, even eager. In a very few cases, they weren’t, or there was just nothing that suited. It’s surprisingly difficult, for example, to find items related to Ali. Getting a Thrilla in Manila button on eBay was kind of a desperate option, but in retrospect, I like it because that fight was so important to the story of Ali.

For the other half—the non-obvious things—my priorities were to represent a broad range of sports and to tell good stories. Then I would hunt for an object to suit. So, for example, the object related to Tommy Kono—a magazine cover—is not that thrilling. But Tommy Kono was the weightlifter of the century, winning titles in four weight classes, and got his start in an internment camp in World War II.  Great athlete, great story, easy call.

What are some of the more surprising objects you came across?

It’s wonderful that the barn in which John L Sullivan trained still exists—it is actually being restored—and inside it are actual barbells he worked with. The staff at UFC (Ultimate Fighting Championship)went out of their way to find Forest Griffin’s gloves, which had been lost. I suspect these will not be lost again; they really are a great item, and a big part of the history of mixed martial arts. I was appalled, but on consideration unsurprised, that Pete Rose will write “I’m sorry I bet on baseball” for an extra fee. And I am amazed that the original Zamboni© is still in working order.

What do these objects teach us about American history?

That every element that is part of American society—for both good and ill--is also represented in sports.

Are there specific themes that connect the various objects?

I wouldn’t say that any single theme connects them all, but several broad themes do emerge. The most important is how uncannily sports replicate larger social trends and issues—whether that is economics, race, women’s rights, politics, or technology. And this has been the case from the beginning. The 17th century “lawne bowle” found in a Boston privy, for example, speaks not only to the sense of play of the Puritans, but confirms that this existed.

Race shows up in many contexts, from very early on. It was interesting, for example, that one of the first manifestations of Jim Crow was the exclusion of black jockeys from racing in the late 19th century. Greed crops up distressingly often—college sports being perhaps the prime example. And finally, the poor management of sports is another broad theme—enabling Lance Armstrong, for example, stripping Jim Thorpe of his medals, or denying the link between football and brain injuries for years.

Those things are all negative. On the other hand, the most important positive theme is that the good things about sports—sociability, fun, and fitness—have been extended to more and more people.

Tell us about the role that ping pong played in Cold War.

For a generation after the Communists took power in China in 1949, there was no official and very little unofficial contact between the United States and China. When Richard Nixon became President in 1969, he was determined to change that. Around the same time, China itself began to consider ending its self-imposed isolation. Specifically, border tensions with Russia were rising, and the Cultural Revolution had weakened the country.  It was sheer serendipity, then, when a hippie-ish American table tennis player bounded onto the Chinese team bus during the World Championships in Japan in 1971. The little incident made a big splash; in its wake Mao Zedong instructed the ping-pong officials to invite the US team to China. This was huge. The Yanks were no match for China in ping pong, but as symbols of possibility, these innocents abroad were ideal. The following year, the Chinese team visited the US, and made a good impression. So what became known as ping-pong diplomacy did a great deal to change attitudes to the People’s Republic of China. Relations with the United States were normalized in the mid-1970s. The two countries could not have ignored each other forever. But ping pong was a wonderful, non-threatening way to take the first halting steps.

Unfortunately, Glenn Cowan, the American who entered the Chinese bus, never built much of a life after his big moment, and died destitute and disappointed. Meanwhile, his Chinese counterpart, Zhuang Zedong, got caught up in politics, made some very bad decisions that hurt a number of people, and then suffered years of punishment. Ironically, he eventually found a modest prosperity by taking the capitalist road—starting a ping pong club. That kind of success always eluded Cowan.

At the 2016 Rio Olympics, American women won more medals than the men did. What objects represent women’s sports history?

Quite a few. I did want to be sure that the history of women and sports was fairly represented. Moreover, as I did the research, I became genuinely fascinated. Not only was it assumed for many decades that vigorous competition was dangerous for women—but high-level sportswomen themselves promoted this idea for an appallingly long time. The mind boggles.

The earliest item is a late 19th century safety bicycle, which women adopted with great enthusiasm. This not only helped to loosen their corsets, literally, but also expanded the boundaries of their liberty (and played a key role in the development of the car, to boot). Another, not-particularly-famous object—Helen Wills’s travel bag—commemorates her 1926 tennis match against Suzanne Lenglen. This was the first time a women’s sporting event was big news. I love the story of the Tigerbelles of Tennessee State, the historically black school that dominated US women’s track for more than a decade—even though their own track was made of dirt, and sited near a pigsty. In addition, where appropriate, I tried to include the women’s dimension in different entries. In the discussion of James Naismith and the original rules of basketball, for example, I noted that women were playing the game enthusiastically a month after he invented it. Of course, I also have items related to famous women, including Annie Oakley, Babe Didrikson, Amelia Earhart, Billie Jean King, Nancy Lopez, Jackie Joyner-Kersee, and the Williams sisters. I like to think that the book as a whole offers a pretty shrewd idea of the development of women’s sports.

Do you have a favorite object in the book?

I can’t decide, so I am going to mention two. I love the tale of the Tenth Mountain Division. Known not entirely correctly as the ski troops, this unit was formed just before Pearl Harbor but was the last to be sent overseas during World War II. The Tenth  was full of interesting and notable people—two of the Trapp Family Singers, as well as Bill Bowerman, Oregon coach and the co-founder of Nike, and various Olympians. They fought bravely in the Italian Alps in early 1945, and suffered great losses. The object is their distinctive reversible parka—white on one side for snowy conditions, khaki on the other. On their return, the men of the Tenth essentially created the modern American ski industry—not only opening dozens of ski areas, but inventing new ski technologies, creating magazines and films, starting programs for the disabled, and so on.

Second, the Mighty Macs of Immaculata University were irresistible. Beginning in 1972, this small Catholic school outside Philadelphia won the first three national women’s college basketball championships. To get to the first one, the team had to sell toothbrushes; only eight actually made the trip. The nuns at the school, some of them former playground stars themselves, were ardent fans, banging metal buckets with religious fervor. This is a case where the object—the heavy woolen tunic the Macs wore to win their first title—is a perfect expression of the story. To look at the ugly and faintly ridiculous thing is to know a lot about the state of women’s college sports in the early 1970s.

Simply as objects, I like Abraham Lincoln’s handball, the nail from Secretariat’s shoe, the golf club used on the moon, and an absolutely beautiful 19th century lacrosse stick.  I have particular affection for two more: the Special Olympics medals, which come from my cousin, who was at the first Special Olympics in 1968 and has been competing ever since, and the painting of Stillman’s Gym, by my late father.

What would the 101st object be?

That’s just too hard. Here are a bunch I considered  and hated to leave out, in no particular order: artificial turf, Mary Decker, Dan Gabler, Edwin Moses, fantasy sports, a chess set from the Fischer-Spassky match; Annette Kellerman’s “obscene” bathing suit; John Wesley Powell’s boat; the Olga Dorfner medal; the Duke-North Carolina rivalry; Ruffian v Foolish Pleasure; the first Baseball Abstract; Norman Borlaug’s Nobel Peace Prize; a kolven club used by Dutch settlers in the 1600s to play a kind of ice golf. I initially thought of having an entry related to crime and sports; I wanted to use the pipe used to batter Nancy Kerrigan, but I called the courthouse and this apparently no longer exists.