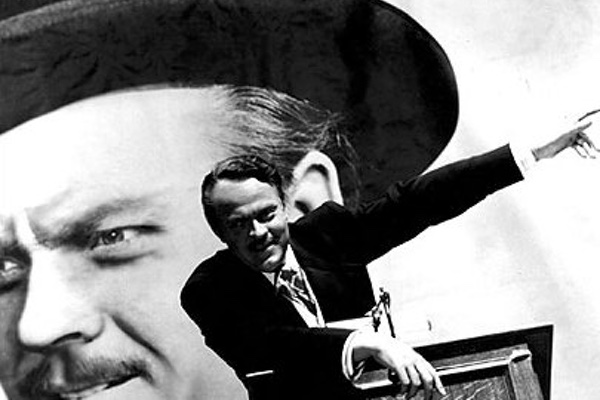 This year is the 100th anniversary of the birth of Orson Welles, the fiery young filmmaker who exploded on to the cultural and historical scene as the writer, director and star of one of the most honored films of all time, 1941’s Citizen Kane. From coast to coast, film societies, museums and movie theaters are honoring Welles with retrospective film festivals.

The Welles film festivals have been going on since New Year’s Day, when the Film Forum, in New York, offered a retrospective of his works with a list of guest speakers who introduced the movies. The very next week the Cleveland Museum of Art followed with its own series of Welles films. That was followed by dozens of other festivals, such as one at the Princeton Garden Theatre in New Jersey that starts May 6.

Two of the biggest celebrations will be in two weeks in Woodstock, Illinois, and Kenosha. Wisconsin. Woodstock was the community that the filmmaker adopted as his hometown. The town kicks off its week long Welles festival on Wednesday, May 6, with a special festive birthday celebration party. On Friday, May 8, Chuck Workman will present his new documentary on Welles, Magician: The Astonishing Life and Work of Orson Welles, followed by a gala party. On May 9 – 12 the festival will screen a number of Welles movies and audiences will listen to a parade of film scholars and historians who will discuss different aspects of Welles’ career.

Next up will be the Orson Welles Society of Kenosha, whose festival will run the same week as that in Woodstock. They begin May 6 at Carthage College with a program of clips from Welles films followed by a talk from Patrick McGilligan, author of Young Orson, an upcoming book on the filmmaker. From then until the end of May, at local colleges, museums and libraries in the Kenosha area, the Society will offer a number of screenings of Welles films and talks by film critics and authors about his work.

“We have been planning this festival for 18 months; the work involved more than twenty institutions,” said Nita Hunter, head of the Kenosha festival advisory board. “We think that the month long festival will get many more people, particularly young people, interested in Welles’ films.”

Hunter said that despite the fame of Citizen Kane, many people have never seen the movie. “I was talking to a teacher, well-educated and well-versed, someone who sees a lot of Shakespeare, and she admitted to me that she had never seen Kane,” she said.

He was remembered not just for Kane, but a number of movies, some good and some bad, years of theater and radio work and a lengthy career as an actor and narrator and host in television.

“There is a false belief among many Americans that Welles only made a handful of movies and that was it,” said author of three books on Welles (Whatever Happened to Orson Welles) and film critic Joe McBride, of San Francisco State University. “He made a large number of films, but many were never finished. He did a lot of work in Europe that was not shown in the U.S. His legacy is that he still has an unfinished legacy.”

McBride called him “one of the most vital film makers that ever lived.”

Why is America still so crazy about Orson Welles after all these years?

“First, he made Citizen Kane, perhaps the greatest film ever, and people have raved about it for generations. They show it in all the college film courses,” said Chris Collier, the associate director of the Princeton Garden Theatre, whose Welles festival opens May 6. “Second, he was a very public, very famous and very intriguing man. Welles was on television all the time as the star or narrator of shows. There were a lot of magazine articles about him. Everybody knew who he was and everybody was always interested in what he had to say. “

. Orson Welles enjoyed a brilliant early career, a career that began in the theater as a director for the Federal Theater Project. He and John Houseman formed the Mercury Theater Company in 1937 and staged a half dozen plays over several years. Welles shot to fame in 1937, at the age of 22, as theater director of a ground-breaking Broadway production of Caesar. The following year, he startled the country with a Mercury Theater on air radio production of H.G. Wells’ War of the Worlds. In his true to life radio broadcast, Welles had aliens landing in New Jersey. Many in the country believed it was a true story. It made Welles a world-wide sensation. Then, in 1941, at the age of 25, he wrote and directed Citizen Kane.

The director was going to produce film biography of evangelist Aimee Semple McPherson, but changed his mind. He chose Kane because the Kane story was close to that of real life newspaper publisher William Randolph Hearst, born to wealth and a man of unlimited imagination. Welles saw in Hearst not only the rags to riches American dream, but all of the American dreams rolled into one, and their problems.

Charles Foster Kane was handed a fortune and spent nearly all of it. He had the chance to be the Governor of New York, maybe even President but bungled it with an illicit sexual affair. He had a chance to be loved by all of his workers, and all Americans, but blew it. He had the chance to love a wonderful woman, no, two wonderful women, and wound up with no one. He even split up with his best friend, a man that had followed him all of his life. He had it all, and booted it all away. He wanted to be loved and was not. He wanted to be right on key issues in world history and turned out to be wrong. Kane really wanted to be a great man, but never could be.

After Kane, he directed the Magnificent Ambersons in 1942 and the Lady from Shanghai in 1947. He then fled to Europe, where he remained for eleven years. He returned in 1958 for his next big film, A Touch of Evil. Over the years, he appeared as an actor in many movies and on television and in the theater.

The entire world predicted great things for him, but Welles never followed up on his success with Citizen Kane with huge subsequent films. Oh, he made several more movies, but none were mega hits and a number received poor reviews. Late in life, he was most famous as the television pitchman for a wine company, Paul Masson. Remember: no wine before its time? All those appearances on the Johnny Carson show?

Hollywood studios heads hated him. His films were almost always over budget and turned in late. RKO fired him from a documentary. He feuded with most of the studio chiefs with whom he worked. His work, after Citizen Kane, was called modest at best by many in Hollywood. “In his very second film, The Magnificent Ambersons, the studio heads took the movie away from him because he had problems,” said critic McBride. “It was a sign of studio attitudes towards him.”

Welles did not win any popularity polls after he fumed about the actors with whom he worked. Welles made tapes on actors for a book he planned to write. In the tapes, he disparaged many. He called Laurence Olivier “stupid,” Spencer Tracy “hateful,” and Charlie Chaplin “arrogant.” Jennifer Jones was “hopeless.” He told a friend he could not bear to watch any of Bette Davis’ movies. He said James Stewart was a “bad actor” and that that Joan Fontaine had “two expressions, and that’s it.” He said of Alfred Hitchcock’s movie “Rear Window” that “it was the worsts movie I have ever seen.”

Actors usually found it difficult to work with him. Critics never gave him a break, he argued, because they were always waiting for the next Citizen Kane.

“I think he found it difficult get along with the movie industry chiefs. I think, too, that he was a very bold and innovative director. He pushed the boundaries of film and I don’t think the public was ready for that,” said Princeton Garden Theatre associate director Collier.

McBride sees numerous reasons. “He raised money for his own films and used his pay from TV to make films. He thought that was good, but people saw that as a sign of failure,” he said. “He exiled himself to Europe, tied to the McCarthy hearings, right at the time his career was ready to peak in the late 1940s. He made classy films like The Lady from Shanghai that was ignored.”

McBride said Welles would start a project and then not finish it. He made movies in the 1950s that were decades ahead of their time. Welles did all those movies in Europe that were not shown here. “I remember people making fun of him for the wine ads, “said McBride.

McBride hopes all the festivals, and his incomplete work, will give Welles a new life. “There are people completing two his unfinished movies right now. As the years go by, other projects might get finished,” he said.

Hunter, of the Kenosha Festival, scoffed at the idea that he only made a limited number of films. “He did make a lot of movies over a lot of years, but the public just did not support them,” she said.

So how did it all end for Orson Welles? After a century, what will the public remember?