We keep pledging to study the cause of riots like Ferguson’s. And we keep ignoring the lessons.

Merlin Chowkwanyun is a Robert Wood Johnson Health & Society Scholar at the University of Wisconsin-Madison. 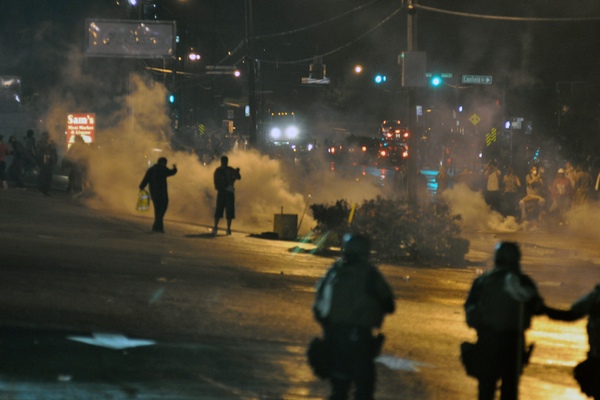 ...Riot commissions followed unrest in New York, Philadelphia, Cleveland, Los Angeles, Detroit, Newark, and many others. In some ways, they were creatures of their time. Besides foregrounding police brutality, some alleged “cultural deficits” of the rioters and instigation by conspirators. (This was the Cold War, after all.) But they also hit on important, and obvious themes—the deep grievances afflicting African-Americans denied the fruits of the post-war economic boom and so-called “affluent society.”

Commissions meticulously identified many dimensions of racial exclusion.  One panel in Cleveland, where the Hough neighborhood had erupted a year after Watts, listed “inadequate and sub-standard housing,” “charging of exorbitant rents by absentee landlords,” “non-enforcement of the housing code,” “sub-standard educational facilities as a consequence of long neglect,” “excessive food prices,” and “denial of equal economicopportunities.”  The report on Watts had similarly highlighted chronic unemployment, education, and health care resources.  It concluded with a searing call to action:

The road to the improvement of the condition of the disadvantaged Negro which lies through education and employment is hard and long, but there is no shorter route… Of what shall it avail our nation if we can place a man on the moon but cannot cure the sickness in our cities?

These regional reports culminated with the 1968 release of the Report of the National Advisory Commission on Civil Disorders.  Commissioned by President Lyndon Johnson a year earlier, the Kerner Report, as it was known, discussed the same underlying causes as the previous studies. It called for “new initiatives and experiments that can change the system of failure and frustration that now dominates the ghetto” and “unprecedented levels of funding” for them.  It made clear that police brutality was a final intolerable insult in a larger cycle of everyday deprivation and denial of basic needs and resources.

Shortly after the Kerner Report, the New York Times warned that “sloganeering, political promises, buckpassing and the proliferation of groups to study and restudy explosive problems will breed more frustration, more rebellion, more civil strife.” Commissions around the nation (beyond just Watts) had now spewed thick, authoritative reports, and public officials pledged swift action. New York City Mayor John Lindsay, who served on the Kerner commission, remarked: “I hope that it won’t be just another study, that it will lead to performance — and the key is performance.” Civil rights activist Fred Shuttlesworth called the report “the first real hard-hitting statement by a body that will be listened to by the public.”

But many public projects hatched in response to the 1960s riots were hampered from the start.  One dramatic example was the Martin Luther King Jr. General Hospital, built in South Central Los Angeles as a response to lack of health care services in Watts.  Throughout its existence, the hospital fought budgetary shortfalls that hampered its operation until, in 2007, it finally closed due to mounting quality-of-care and mismanagement scandals. Meanwhile, the programs and “unprecedented levels of funding” counseled in the 1968 Kerner Report for increasing jobs, educational quality, and affordable housing, never quite came to full fruition.

Those failures of follow-through help explain why so little changed. In Los Angeles, the brutal videotaped beating of Rodney King and the work of theIndependent Commission on the Los Angeles Police Department, chaired by Warren Christopher, showed how urban policing had resisted adaptation more than 25 years since Watts.

Like its antecedents, the 1992 riots in Los Angeles also grew out of frustration with broader material conditions. They occurred after two decades of slashed social spending, economic stagnation, and fiscal austerity. When Los Angeles burned again, it did so amidst high levels of black unemployment and an urban development regime that some observers—most famously Mike Davis in his classic “City of Quartz”—argued had prioritized the needs of the city’s affluent at the expense of the most marginalized.

What then, nearly 50 years after Watts, are we supposed to learn from Ferguson? The choice is a clear one, between concrete action and public policy on one hand, and endless commissions and “conversations on race” on the other...