Why Are Chemical Weapons So Bad?

by Thomas I. Faith 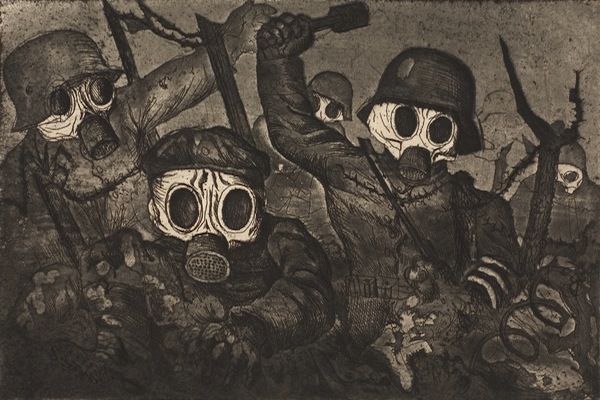 Present-day opposition to chemical weapons is rooted in the experience of poison gas warfare in World War I. While poison has been considered a treacherous method of killing since ancient times, the unprecedented manufacture and use of chemical weapons during WWI contextualizes the present debate in the United States about the morality of chemical weapons. WWI-era proponents of chemical warfare argued that poison gasses were not inherently less moral than conventional weapons, but humanitarian concerns for the victims of chemical weapons have dominated public opinion and resulted in international agreements restricting their use.

Poison gas weapons were forbidden by the laws of war in the nineteenth century, because of preformed, negative opinions about chemical warfare. The Hague Declaration of 1899 required that nations “abstain from the use of projectiles the object of which is the diffusion of asphyxiating or deleterious gasses.” As justification, it referenced the terms of the 1868 St. Petersburg Declaration which acknowledged “the technical limits at which the necessities of war ought to yield to the requirements of humanity,” and denounced “the employment of arms which uselessly aggravate the sufferings of disabled men, or render their death inevitable.” Despite the Hague Declaration’s affirmation that poison gas projectiles were inhumane, however, such weapons were used by all of the belligerent nations in World War I.

The first successful gas attack of the war occurred on April 22, 1915 at Ypres, when the German Army released a cloud of toxic chlorine gas and allowed the prevailing wind to carry it to British, Canadian, French, Moroccan, and Algerian soldiers. The attack was devastating, and the other nations of World War I denounced the moral violation that it represented even as they rushed to manufacture their own poison gas weapons to retaliate. U.S. propagandists likewise characterized Germany’s use of poison gas as inhumane. At a patriotic rally in June 1918, Ohio Governor James M. Cox said that “Germany violated her solemn compact with other nations never to use poisonous gas in warfare,” and that “the shame of that nation will not soon be forgotten.” The notion that Germany’s use of gas was shameful reinforced the idea that poison gas weapons were barbaric, while it simultaneously justified their use against the Germans by the United States and allied nations.

First hand experiences with the widespread use of poison gas during World War I caused many soldiers to support an end to chemical warfare once the war was over. They opposed the future use of chemical weapons not only because of the suffering that gas warfare had caused fellow soldiers, but also because of its potential to harm innocent civilians. In 1925 John J. Pershing, commander of the American Expeditionary Force in France, wrote a letter to the Senate urging that they ratify the Geneva Protocol, a treaty that outlawed poison gas weapons. “To sanction the use of gas in any form would be to open the way for the use of the most deadly gasses and the possible poisoning of whole populations of noncombatant men, women, and children,” Pershing wrote, “it is unthinkable that civilization should decide on such a course.”

While most sought an end to chemical warfare after WWI, however, there were some in the military who urged the continued use of poison gas weapons. Chief of the U.S. Army Chemical Warfare Service Amos A. Fries wrote in 1919 that “there is a popular notion that gas warfare is the most horrible method of warfare ever invented, and that it will be abolished because it is so horrible. And yet it is not horrible.” Fries and other chemical warfare experts in the United States believed that the war had proven that the suffering experienced by the victims of chemical warfare was not quantifiably worse than that experienced by the victims of more conventional weapons. They orchestrated a public relations campaign in an attempt to change public opinion on the subject after World War I, and they claimed that chemical weapons were as humane as, if not more humane than, conventional weapons.

Fries and others like him viewed the popular rejection of chemical weapons as an illogical, emotional reaction against the suffering poison gas was perceived to have caused soldiers and civilians during the war. They recognized a contradiction in the public’s apparent disdain for poison gas, and their acceptance of other methods of warfare. The commander of the U.S. 1st Gas Regiment during World War I, Earl J. Atkisson, described this contradiction in 1925. He wrote that “war is abhorrent to the individual, yet he accepts blowing men to pieces with high explosive, mowing men down with machine guns, and even sinking a battleship in mid-ocean with its thousand or fifteen hundred men being carried to certain death... However, to burn the skin of a man outrages all his civilized instincts.”

Atkisson, Fries, and other chemical warfare proponents believed that this contradiction would eventually be resolved in favor of chemical weapons. They anticipated that, over time, the use of poison gas would become acceptable, just as bayonets, bullets, and bombs had. Instead, the belief persisted that casualties caused by gas were somehow more barbaric than those caused by bullets or other weapons of war, and the nations of the world continued to craft international agreements prohibiting chemical weapons on humanitarian grounds.

Attitudes toward chemical weapons should be assessed in light of the complex legacy of poison gas use in World War I. The fact that experts of the time believed that there was no moral difference between chemical weapons and conventional ones should not lead one to conclude that chemical warfare is humane. The inherent inhumanity of all methods of warfare should be measured by the relative destructive power of the methods involved and their potential to harm noncombatants. Those following the conflict in Syria should note the destruction caused by all of the weapons employed to determine, in the words of the St. Petersburg Declaration, “the technical limits at which the necessities of war ought to yield to the requirements of humanity.”